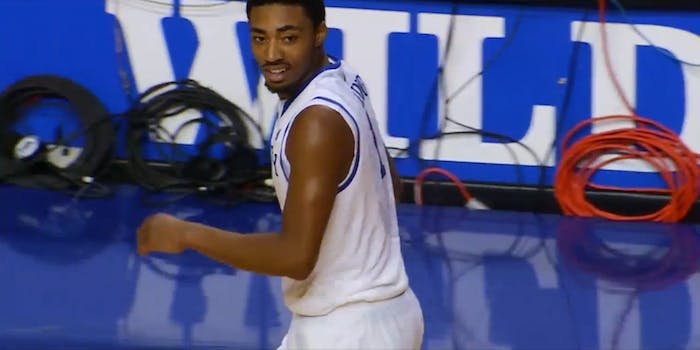 University of Kentucky's James Young might have made the shot of his college career—just not the one he wanted.

University of Kentucky’s James Young might have made the shot of his college career—just not the one he wanted.

The freshman guard scored 16 points and five rebounds during Monday’s exhibition game against Division II Montevallo. The Wildcats had a 19-point lead about five minutes into the second half after one of Young’s teammates blocked a shot from Montevallo. Not wanting the ball to go out of bounds, Young chased it and threw it behind his back.

What happened next has to be seen.

Thanks to an obscure rule in the NCAA basketball rulebook, the field goal, which normally would be awarded three points, was only worth two points because it was shot in an opponent’s basket. Still, the crowd couldn’t help but give Young a standing ovation as the teams resumed play.

Luckily for Young, that didn’t cost Kentucky the game. They easily defeated Montevallo 95-72 with Young finishing as Kentucky’s second-best scorer.

Here it is from another angle.