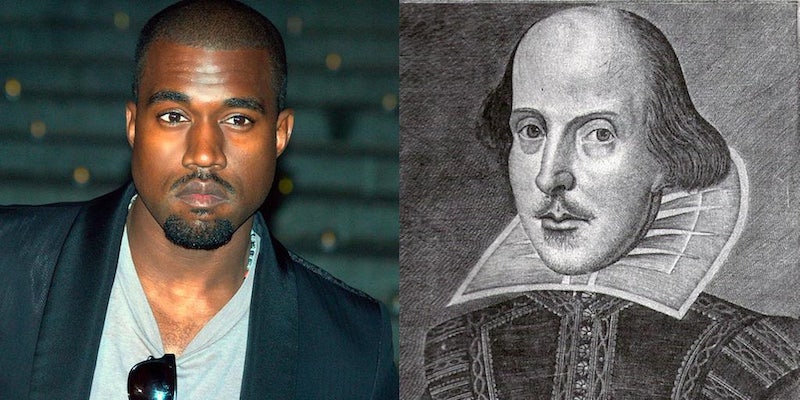 Kanye’s tweets get the tragic Shakespearean treatment they deserve

This could have totally been in 'Hamlet.'

Two of greatest creative minds of all time have been smushed together: Kanye West and William Shakespeare.

If you somehow missed all the Twitter beef that went down on Wednesday, here’s a quick recap: West went off on Wiz Khalifa when he thought Wiz was talking shit about his boo Kim Kardashian, when in reality “kk” was referring to some weed. And in short order, the wildest tweet storm in recent history swept over the Internet.  The rapper has since deleted his tweets, but not before we preserved everything for posterity and infinite lols.

And now, comedian David Schneider has put a poetic twist on the whole thing. It’s less two star-crossed lovers and more long-ass soliloquy as done by a Shakespeare actor.

Kanye's tweets as read by a Shakespearean actor.https://t.co/ZrkJjWqmIU

And in true Shakespearean fashion, we were left dead at the scene’s finale when Amber Rose annihilated West with a now-infamous hashtag.