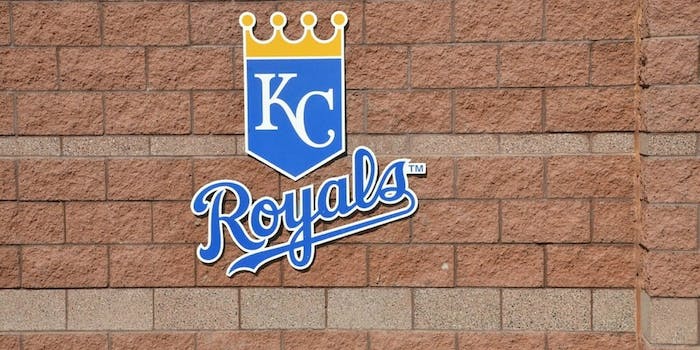 Even Texas Gov. Greg Abbott got in on the action.

Coming off a car chase that led to a 22-year-old jumping off a bridge into the Missouri River, forgive the Kansas City Police Department if it took a few minutes to relax and watch a little baseball on Monday.

But after Royals pinch runner Terrance Gore was called safe while stealing third base against the Houston Astros in the seventh inning of their playoff game, only to have the call reversed by the replay official, meaning Gore was actually out, the Kansas City PD sprung into action the only way it could. With a witty tweet.

That call on Gore was a crime.

On replay, it’s hard to tell who was right.

Clearly, Gore beats the ball to the bag and slides in safely, but it also appeared he briefly left the bag while Astros third baseman Luis Valbuena was still applying the tag.

At the time, the Royals were losing 3-2, and Gore represented the tying run. The Astros scored three more runs to give themselves a four-run lead, but in the top of the eighth, Kansas City scored five to take the lead and eventually went on to win 9-6.

Which prompted yet more tweets from the KC PD.

Holy wow, @Royals! It ain't over 'til KC says it is! (Or 'til someone gets arrested, but we'd rather not have to do that right now.)

BAM. We'll be out at the K on Wed. to make sure everyone has a safe, enjoyable time watching the come-back kids in Game 5! #TakeTheCrown

Unfortunately for Texas Gov. Greg Abbott, that Royals rally made him look like the biggest jinxer in all the land.

In a tweet that was published while Houston still had the lead—and was just as quickly deleted—Abbott paid homage to his state’s team in what he thought was its finest moment. It was hardly the right time to celebrate. 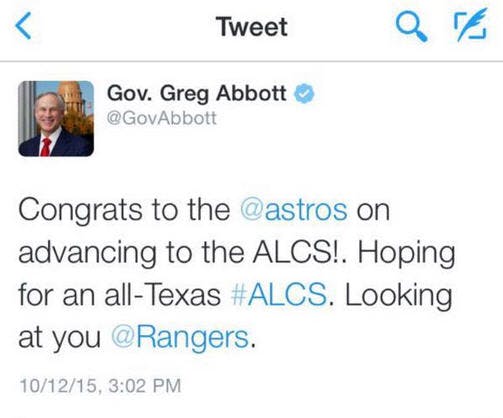 The two teams will play in the deciding Game 5 of the American League Division Series on Wednesday. So, Kansas City criminals take note: that might be an ideal time to do your dirty work, as long as it’s not anywhere near the ballpark.

Photo via Charles Sollars/Flickr (CC BY 2.0)