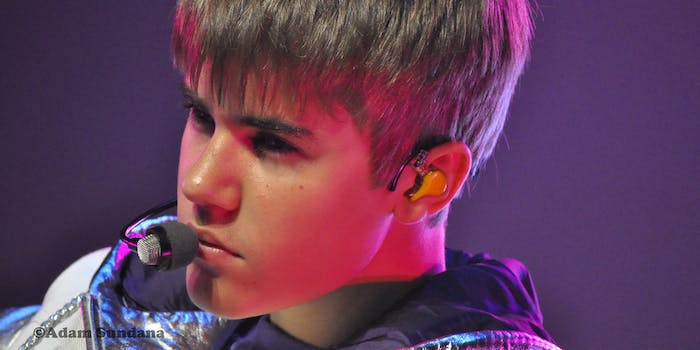 You'll never get invited to one of Justin Bieber's house ragers, but if you do, don't even think about live-tweeting it.

You’ll never get invited to one of Justin Bieber’s house ragers, but if you do, don’t even think about live-tweeting it. The precocious singer will sue you to high heaven.

The 19-year-old is now making friends and acquaintances sign a waiver before entering his Calabasas, Calif., home. The waiver, obtained by TMZ, warns “under no circumstances will you divulge the details of you entering and being on the Property or engaging in the Activities by any means or through any media whatsoever, including without limitation, through photographs, video, blogging, texting, ‘Tweeting’ or posting any such information on any social media site.”

Among other concerns, guests are banned from bleating about the “physical health, or the philosophical, spiritual or other views or characteristics” of Bieber or anyone else associated with him.

The “activities” also cover what would appear to be bawdy parties. Just how rowdy do those shindigs get? Well, the waiver suggests activities carried out in the home are “potentially hazardous” and urges those who are not “medically able” or “properly trained” to avoid taking part.

It adds those activities carry “certain inherent risks that cannot be eliminated completely, ranging from minor injuries to catastrophic injuries, including death.” The waiver, of course, absolves Bieber and his associates of any liability.

It’s hard to say exactly to figure out the monetary damages that might arise from tweeting about Bieber partaking in a questionable-looking roll-up cigarette, for instance. So, should you happen to share an Instagram photo or Vine from within Casa del Bieber, you’re liable for a cool $5 million. That’s right, a single tweet about the murky deeds going on within his home could ruin you.

TMZ does note that other celebrities ask guests to sign such waivers, most likely to salvage some shred of privacy in their public lives, to avoid embarrassing details from leaking, and to get away with pretty much anything in their own homes without worrying someone will spoil the fun.

The danger of death clause is particularly interesting. Does Bieber have tanks full of piranhas at his home? Does he tie party guests to spinning wheels while throwing knives at them? Thanks to that gag agreement, we may never know.