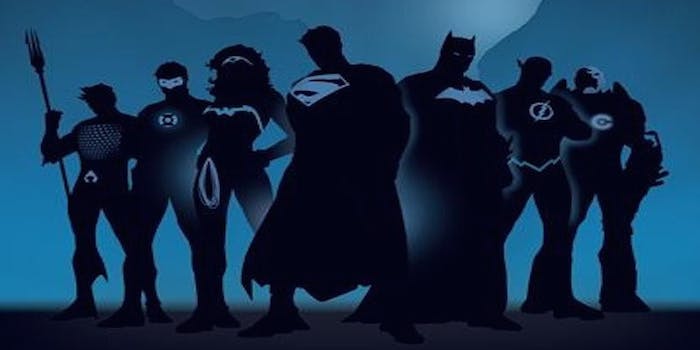 If Warner Bros. wants its own Avengers-style superhero franchise, they need to learn the right lessons from that film's success.

Last week, the Internet nearly had a meltdown when intense fandom reached a critical mass over the announcements of both the new Star Wars cast and the Justice League movie. And as per usual, opinions in both the geek and non-geek communities flared alongside these developments.

The Justice League adaptation in particular seems to be receiving more skepticism than excitement. The list of potential problems surrounding the film is long, with the excessive amount of characters, the choice of Zack Snyder to direct, and Warner Brothers’ rush to develop the world of DC Comics chief among them.

Brian Cronin at Hitfix writes, “On the one hand, it is definitely great to see a Justice League film. On the other hand, I am wary about both A. It being an extension of the Man of Steel universe and B. It being another Zack Snyder film.”

Still, not everyone is down on Justice League. Mark Hughes at Forbes wrote an impassioned defense of the film, citing Warner Brothers’ previous success with superhero movies (Man of Steel and The Dark Knight trilogy took in $3.5 billion altogether), the studio’s other triumphs with expansive franchises (such as the Lord of the Rings and Harry Potter films), and the way that massively profitable blockbusters like The Avengers (the obvious comparison to the Justice League) also included a plethora of characters.

But more than anything else, Hughes characterizes Warner Brothers’ focus on talent as the reason to be optimistic about a Justice League film.

What matters is storytelling, what matters is the quality of the film. And in that regard, the screenplay for Superman vs. Batman has been written by Oscar-winner Chris Terrio; it’s directed by Zack Snyder—one of the greatest directors of comic book adaptations; it stars a cast of Oscar-winners and nominees; it added Oscar-winning writer-director Ben Affleck as Batman; and it’s got two years to film and edit and be perfected as much as possible. Warner knows the cinematic future of their DC Comics properties relies on this film being great and a huge success, and they’re taking their time to get it right, even if it requires delaying the release by a year.

However, Hughes fails to look at the other side of his arguments. He calls Zack Snyder “one of the greatest directors of comic book adaptations,” but this is clearly an opinion that is not shared by everybody.

Charlie Jane Anders at io9 expressed her frustration with Snyder. “After watching 300, Watchmen, Sucker Punch and Man of Steel, there’s plenty that I admire about Snyder’s film-making,” Anders says. “He’s great at creating arresting visuals… But he has a problem with capturing real emotions, as opposed to surfaces, something the cold and depthless Man of Steel confirms. And he especially has a problem with female characters, because his love for pulp imagery leads him to explore women as fetish objects.”

Then there’s Ben Affleck. Although regarded as a very good filmmaker, Affleck is less acclaimed for his acting at this point in his career, but acting is just what he’s been hired to do in upcoming Batman vs. Superman and Justice League films. The Internet’s reaction to this casting was so severe, so overwhelmingly negative, Jesse David Fox at Vulture noted that Affleck himself “thought he was prepared for the backlash, when in actuality he wasn’t.”

Moreover, it’s strange that Warner Brothers would involve Affleck in the Justice League franchise only for his acting. In a separate piece, Hughes wrote on why Affleck was a good choice to play the caped crusader, he even said, “I cannot imagine any scenario in which Warner Bros. made a deal with him that didn’t include a gold-plated director’s chair on the set of a Batman solo movie.” Yet it appears Warner Brothers has done exactly that.

There’s also the fact that while Man of Steel was by all accounts a great success, its $668 million gross doesn’t look nearly as intimidating when you consider that the Dark Knight trilogy makes up the large majority of that $3.5 billion mentioned earlier. Furthermore, although the Dark Knight trilogy’s massive success is impressive because none of the ticket sales were inflated by 3D prices, this only goes to show that as a jumping off point for a new franchise, Man of Steel could not elicit the same excitement, even with the enticing prospect of 3D.

And while Warner Brothers has indeed given themselves ample time to get their Justice League franchise together, the delayed dates may also denote issues they are having putting all the pieces into place. Let’s not forget, Marvel only took four years between the first Iron Man film in 2008 and The Avengers in 2012—but just because their schedule was somewhat rushed doesn’t mean everything wasn’t intricately planned out.

The comparisons Justice League will continue to get to The Avengers are its biggest problem. But in addition to The Avengers, Hughes also talks about the Dark Knight trilogy as an example of a series that worked despite cramming in many characters. However, it’s important to remember that the Dark Knight films are still Batman’s story, no matter how many villains and allies accompany him along the way.

On the other hand, The Avengers took three separate heroes (Iron Man, Thor, and Captain America) and tossed them into an ensemble movie. This task was made more difficult by the recasting of the Hulk (Mark Ruffalo), who had previously been played by Edward Norton in a film that is only sort of a part of the larger Avengers franchise, and the addition of Hawkeye (Jeremy Renner) and Black Widow (Scarlett Johansson), neither of whom had their own films, despite minor roles in other Marvel movies. And yet somehow, with Joss Whedon at the helm, they pulled it off.

The Justice League film is problematic because its approach falls somewhere in between these two franchises. Unlike Christopher Nolan’s Dark Knight trilogy, Zack Snyder’s upcoming Batman vs. Superman and Justice League films will not be the story of one character. Henry Cavill’s Superman may be our access point into this world, but with the addition of Batman, Wonder Woman, and who knows how many others, the upcoming DC films are likely to be more about the ensemble than one main character.

In theory, this could work fine. It’s what The Avengers did, after all.

Except for the main Avengers all got their own movies before being thrust together. Warner Brothers seems to have no interest in developing their new Batman and Wonder Woman characters on their own, so when they all come together, it’s unlikely audiences will respond to the dynamic of Justice League the way they did to that of The Avengers.

The approach would have been tantamount to Marvel inserting Thor and Captain America into an Iron Man sequel, and then throwing them all into an Avengers film after that. This probably would have been a safer bet, but by taking the greater risk of giving these heroes adaptations all their own, they also yielded a greater reward: The Avengers ultimately grossed over $1.5 billion worldwide, which is almost half of what the entire Dark Knight trilogy made.

Superhero adaptations aren’t going away anytime soon. In fact, this weekend will see the release of the latest big budget comic-book epic, The Amazing Spider-Man 2 (which is expected to rake in huge numbers, despite likewise receiving criticism for trying to do too much at once). The Justice League film certainly has the potential to be one of the biggest of them all, but a lot of things have to fall into place first.

And if it’s going to reach the quality and profitability of the Avengers and Dark Knight franchises, it’s also going to have to find a way to split the difference between the two. And that’s no easy task.