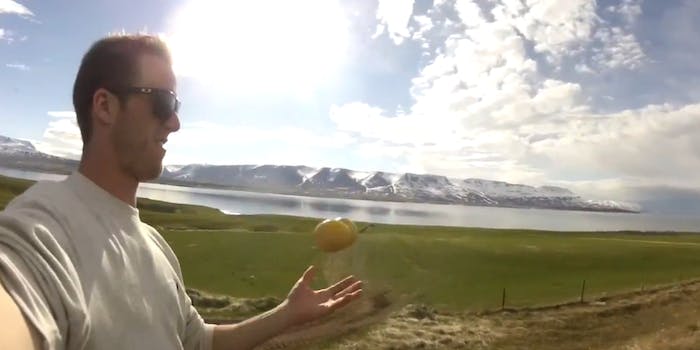 Juggler takes YouTubers on a gorgeous tour of Iceland

Armed with a GoPro, one man set out to juggle his way across Iceland and chronicled his trip in a YouTube video.

Armed with a GoPro and a set of 28-year-old balls, one man set out to juggle his way across Iceland and chronicled his trip in a YouTube video.

Set to the pulsating soundtrack of “Nýfallið regn” by singer Ásgeir Trausti, the clip’s a sharply edited whistlestop tour of the country, the juggling little more than an excuse to show off the natural beauty of the landscape.

The video, which has more than 149,000 views in a day, seems like it could have been dreamt up by Iceland’s tourist board. Yet the redditor who claims to be the juggler says he spent a week there. “I basically got a map in Reykjavik and asked a bunch of locals where to go,” tahoejuggler said. “My map was covered in circles before I headed out.”

Judging by his comments, his next video might be even more breathtaking. “I’m in Hawaii this week and am hoping to juggle in a helicopter…we’ll see how it goes,” he wrote.