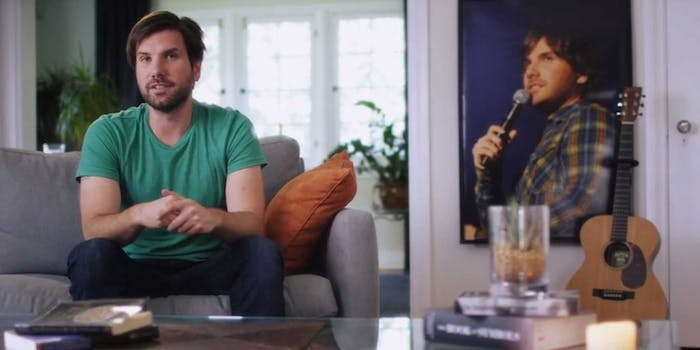 The League actor wants to get some of the Zach Braff-style money.

Jon Lajoie—Taco from FX’s The League and YouTube comedy legend—just wants to be “Jay-Z” rich. So he’s turning to the world’s most popular crowdfunding platform.

On Tuesday, the comedian launched “Jon Lajoie’s Kickstarter,” a pitch video in which he hits up his fans for money so that he can become wealthy beyond belief.

“After I saw how Veronica Mars and Zach Braff fans responded to their projects in a mind-blowing way, I couldn’t help but to think: What if instead of relying on traditional methods of wealth acquisition, what if I turned to you, my fans for the money,” he states.

“By you simply handing over your hard-earned money to me, I can become super rich without all the added pressure of actually doing something.”

Like any good Kickstarter project, Lajoie is offering several fantastic rewards. For $20, you’ll get… well, nothing. For $50, the actor will send you a photograph of himself burning $50 while riding a jetski.

Are you a high roller, not enticed by such paltry tokens of appreciation? Lajoie’s got you covered. Contribute a cool grand and he’ll send you a video of him looking at your Facebook profile “and being disgusted by your pathetic life.” For $10,000, Taco will allow you to tell your friends that you met him. You won’t actually get to meet him, though. He’s too good for that.

Amazingly, the actor has already surpassed his goal of $500 million. If you haven’t contributed yet, however, don’t let that last fact dissuade you from doing so.

“Yes, we’ve reached our goal, but there’s no limit to the wealth gap between you and I,” he notes on his site. “Keep donating so that I can reach my life long goal of being too big to fail!”