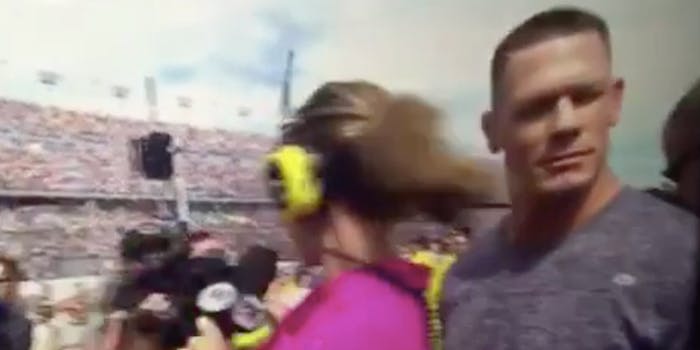 For once, he didn't interrupt.

As you’ll see in this Vine, Little is covering the Daytona 500 for Fox, and as she rushes through the crowd, she not only ignores Cena but unintentionally smacks him in the face with her ponytail. Everything happens so quickly that even Cena is visibly surprised by the situation.

Little eventually took to Twitter to apologize, but Cena was a good sport about it all, making a joke of what happened.

How could I miss @JohnCena! We talked, planned it and I turned at the exact wrong time & never saw him! Apologies Champ! #YouCantSeeMe

Plus, he served as the Honorary Pace Car Driver.

.@JohnCena receives instructions on driving the Pace Car at the #Daytona500! pic.twitter.com/D12DhlIcpY

And @JohnCena leads the @NASCAR racers out in his white pace car for the opening lap of the #Daytona500! pic.twitter.com/c3RbOwLbmw

Ultimately, we can’t wait to see who remixes this Vine, another gem showcasing Cena’s already meme-able persona. And if we’re really lucky, maybe Little will make a cameo on WWE and show Cena what her ponytail can really do.