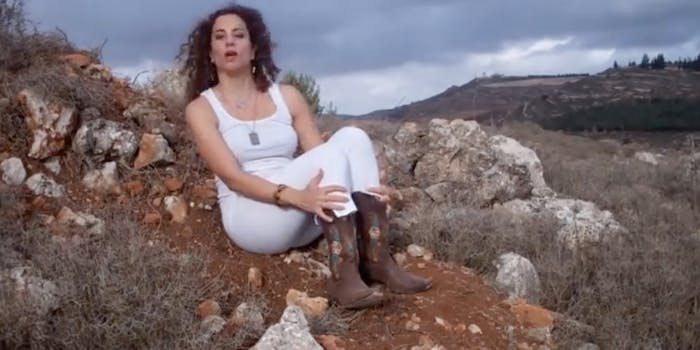 Even Miley herself wouldn’t twerk on this.

Even Miley herself wouldn’t twerk on this.

To promote her novel The Settler, Orit Jean Arfa recreated Miley Cyrus’s “We Can’t Stop” music video, changing the lyrics to celebrate Jews thriving in Israel. YouTube is not on board.

The pro–Israeli settlement video, “Jews Can’t Stop,” is like an open invitation to the dredges of YouTube to be as awful as possible. Commenters crack their knuckles and delightedly compare the Israeli army to the Nazis. The video currently has overwhelmingly more “dislikes” and negative comments from both Jews and non-Jews.

In a piece called “Jeffrey Goldberg Twerks John Kerry’s Butt,” Arfa explains that she recently took exception to a Bloomberg opinion column called “John Kerry Is Israel’s Best Friend” by Jeffrey Goldberg, who had previously written something that was nominally about Miley. So, she created “Jews Can’t Stop.”

In the video description, Arfa writes: “A new video take on Miley’s song has channeled her defiant spirit towards a worthy cause: defending Jewish rights to live and thrive in the land of Israel. Jews can’t stop building, loving, praying, doing what we want in their land, in their homes.”

Arfa’s book trailer for The Settler is also on her channel. The debut novel follows a young Israeli woman evicted from Gaza who finds refuge in Tel Aviv’s nightlife.

Arfa has also spoken out against the expulsion of the Jews from Gush Katif when promoting her book.