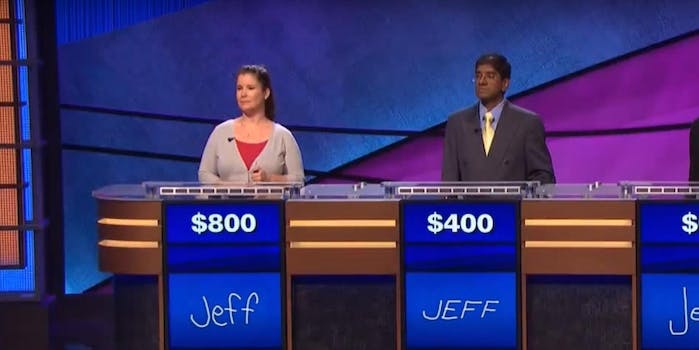 A test of knowledge is one thing. A test of Jeff is another.

Finally, there is a Jeopardy! parody that caters to the population whose name was one of the most popular in 1962 and has since been on a steady decline. The genius gr18vidz14kidz has poured heart and soul into a YouTube clip that combines the glories of a thrilling trivia-centric round of the popular television game show with the name Jeff. This. Is. Jeffpardy!

Top Jeffpardy! contestant Jeff has a one day grand total of $8,100 but we’d expect nothing less from Jeff unless Jeff happens to overtake Jeff with the correct answer to the prompt “Jeff Jeff Jeff Jeff.” No, Jeff. It’s not “San Francisco.” The answer is Jeff. Always has been, always will be.

Think you’re up to the challenge of a thrilling round of Jeffpardy! on national—nay, international—treatment? Well, you probably are. It certainly isn’t that hard to participate. Just keep your ears to the ground and your vocal chords warmed up to the name “Jeff” while also at least retaining the intro prompt “what is…” We’re rooting for you, Jeff. The whole jeffing country is.

Shockingly, the good people at Jeffpardy! have yet to respond to the viral takeoff their Jeff-centric videos have caused. We can only assume that their simple statement to the world is to let go and let Jeff.