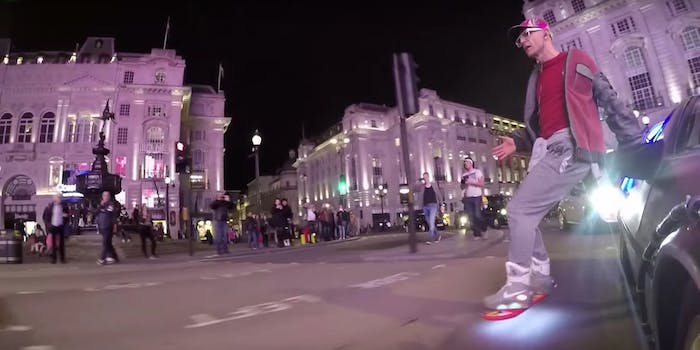 London is the new Hill Valley.

We’re one step closer to building the future that we saw in Back to the Future Part II, now that a British man has taken a DeLorean and a hoverboard through one of the busiest places in London.

Although what we call hoverboards are illegal in London, we’re not sure what the law would make of this. Late Monday night, Jason Bradbury took a DeLorean out on the town while dressed in Marty McFly-like futuristic clothes, floating through Piccadilly Circus while holding onto the car.

We’re not quite sure how Bradbury made the hoverboard float, but it looks to have happened the way it was filmed; he Periscoped the stunt, and he’s floating in that, too.

But now that he’s conquered the future, it’s time to bask in all of its glory.