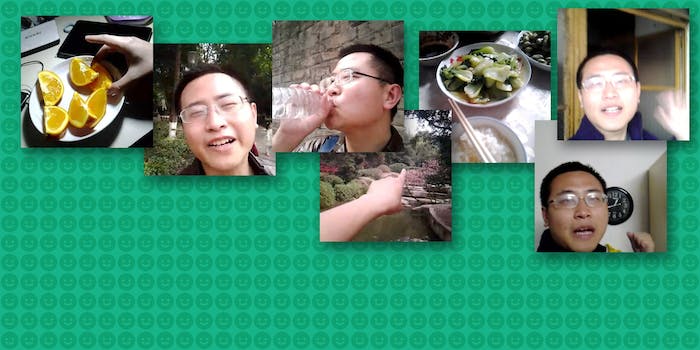 One Vine user has built a following of thousands with karaoke, Chinese scenery, and a quest for a white woman to marry.

Meet Chinese Vine user James White. He shares everything about his day with his followers: from his breakfast to his singing, from his trips around town to his search for a white woman to marry.

When he’s not showcasing his linguistic talents, he takes Vine users on an enthusiastic journey around China.

White is so eager to share his life in China on Vine that he once fell into a river while trying to record a video.

As well as sharing short videos of his travels, White also introduces his followers to his traditional Chinese meals.

While some Vine users might find White’s videos simplistic and lacking in the flashy cuts and planning found in the works of other Vine stars, James White has amassed over 50,000 followers. But White isn’t just on Vine to eat food and explore China; he’s also looking to marry a white woman.

White repeatedly reminds his followers that he’s looking for a wife.

Vine users around the world have tried to help James in his quest to find a wife by setting traps and producing new versions of his most famous posts.

Unfortunately, White has been unable to find a suitable partner, possibly due to the size of his apartment.

Some Vine users have offered to send White money, but he has turned down their offers.

In recent weeks, it appears that White’s luck may have turned, as many white women across the world have created Vine videos expressing their interest in marrying him.

White isn’t showing any signs of slowing down his Vine charm offensive. As his followers have grown in number, his posts have started to be shared widely across the site, with each of White’s videos gaining hundreds of shares and appreciative comments. In a series of 34 posts, he delivered a new technique of singing an entire song through short snippets.

His cover of Leo Sayer’s “More Than I Can Say” even inspired famous Vine user BatDad to create his own version.

So what’s next for White? Well, it looks like more of the same. Until he finds his perfect woman, it seems that we will continue to be treated to multipart Vine performances and vignettes from his life in China.