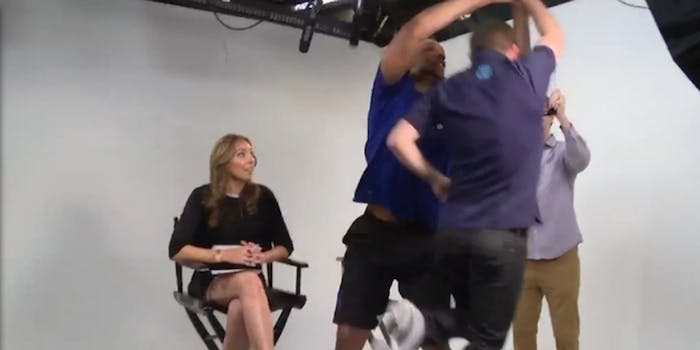 Potential No. 1 draft pick Jahlil Okafor did not appreciate this prank attempt

If you’re a potential No. 1 overall pick in next month’s NBA draft, you have to be ready for an attempt by anybody to try to make you look like a chump. And you must be ready anytime somebody tries to posterize you.

Duke center Jahlil Okafor certainly is ready. Even when he’s doing an interview with SI.com’s Maggie Gray. Take a look.

So, that didn’t go exactly right for SI.com NBA editor Matt Dollinger, who took credit for the failed dunk attempt against a guy who stands 6-foot-11 and weighs 270 pounds.

During the 2014-15 season at Kentucky, Okafor blocked 54 shots, by far the most of any Blue Devils player last year. So, Dollinger shouldn’t feel bad, even if Gray has a hard time suppressing her laughter at just how poorly her colleague failed in his attempt against Okafor.

Even so, the failed stunt ended well for everybody.