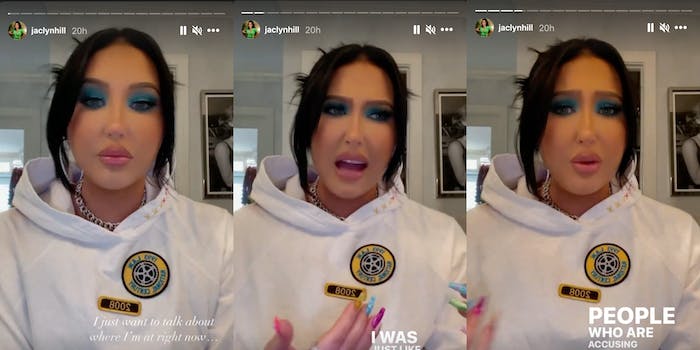 Beauty YouTuber Jaclyn Hill says she was almost abducted, people are accusing her of lying

Beauty YouTuber Jaclyn Hill says she had “one of the scariest experiences of her life,” but people on Twitter aren’t buying it. Instead, some are threatening her.

On July 11, Hill tweeted, “I seriously had one of the scariest experiences of my life last night. 2 guys were literally trying to physically pull me into their car while I was alone outside. Thank you Jesus that I’m okay but that was so traumatizing!”

In a follow up tweet, Hill promised to go into more detail about what happened via her Instagram story so that others don’t have the same experience.

“It’s bullshit women have to be scared of these things,” she said.

Her announcement was met with mixed responses, with beauty influencer Kevin James Bennett loudly blasting what he called her “fabricated” testimony.

He tweeted a screenshot of Hill’s tweet, saying, “Interesting. Attempted abduction outside her home, as her company is dragged across social media for an intentional lack of inclusivity.”

Then he asked for a police report. Responding to his own tweet, he added, “I’m going to guess Jaclyn will release an IG story where she relates the (fabricated) incident, sheds some crocodile tears and then tries to sell something (swipe up).”

Bennett continued to question Hill’s story on Twitter, repeatedly asking for a police report, which would be “easy to verify.”

Folks rejected the notion that Hill had to provide evidence, saying she didn’t need to prove anything and that people react differently in the face of trauma.

Hill was even threatened by one person who wrote they would “see to it that u get what u deserve,” prompting an incredulous reaction from Hill and others.

On her Instagram Story July 12, Hill said she was “so livid” about the people accusing her of making up the story in order to get attention.

Not everyone doubted her, though. Several women interacted with Hill on Twitter, voicing their support, sharing similar experiences and telling her they’re happy she’s okay.

Her supporters criticized Bennett and other men who doubted her experience.

On her Instagram story July 13, Hill announced the launch of her new summer collection and said she was going to try to enjoy the day.

Hill did not respond to the Daily Dot’s request for comment.