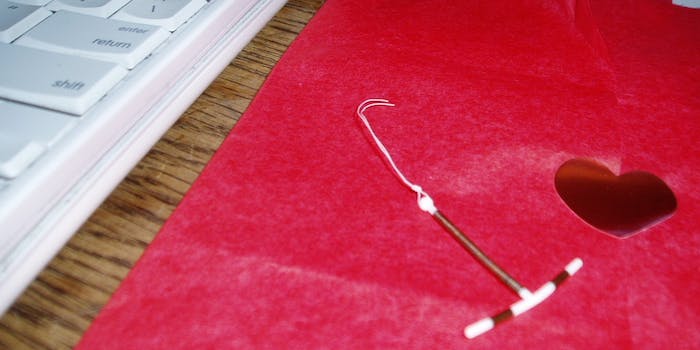 You might think you're being frugal, but you're just being an idiot.

Listen, times are tough, ladies. I understand that. Jobs are scarce, the economy’s in the toilet, and Emma Watson’s haircut is so cute it makes you cry just to look at it. That having been said, even if you’re having a tough time and you’re hard up for cash, there are still certain lines you probably shouldn’t cross. Case in point: This lady selling her used IUD on Facebook for $40. 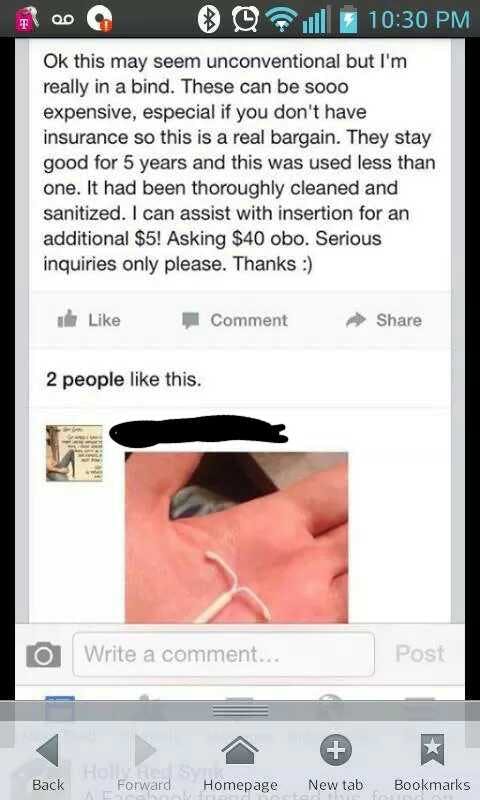 If you live in a state with a less-than-comprehensive sex ed program, you’ll be forgiven for not knowing that the above is an IUD (Intra-Uterine Device), a contraceptive device that is implanted in the uterus to prevent pregnancy. The example here is a hormonal IUD, which releases a small amount of the chemical progestin to thicken a woman’s uterus, thus preventing sperm from reaching the egg. Hormonal IUDs last up to five years, according to Planned Parenthood, and they can cost as much as $1,000 without insurance.

To be fair, this isn’t the only birth control sold online. The emergency contraceptive Plan B is available on Amazon at a lower price than most pharmacies charge, and there are also tons of shady-looking websites peddling hormonal birth control pills like Yasmin and Ortho-Tricyclen without a prescription. It’s also not uncommon for women to buy and sell used menstrual cups and cloths online, usually as a way to save money and be environmentally friendly.

But while you might be squicked out by the idea of using another lady’s DivaCup (and while doing so might put you at risk for bacterial infection if it’s improperly cleaned), using another lady’s IUD is a horse of a different color. For starters, inserting an IUD isn’t like using a menstrual cup or a hormonal birth control ring, meaning you can’t just fold it up into origami, lie back, think of England, and shove it in. It has to be inserted by a medical profession, who inserts a speculum to open up the cervix. (The procedure is also apparently painful as all hell.)

Also, much like hormonal birth control pills, IUDs are prescribed by a medical professional who has to check you out to decide whether or not you’re a good candidate for IUD insertion. If you’re not, it’s bad news bears: Potential side effects include cramps, backaches, bacterial infection, and spotting (bleeding between periods). In rare cases, IUD insertion can also cause perforation of the uterus, so yeah, it’s probably not a procedure you’d want one of your Facebook friends to be in charge of.

To sum up, ladies: No matter how financially hard up you might be, it’s never a good idea to buy hormonal contraception without a prescription, let alone one that requires surgical implantation. Because while a used IUD on Facebook might only cost only $40, an unperforated uterus is priceless.