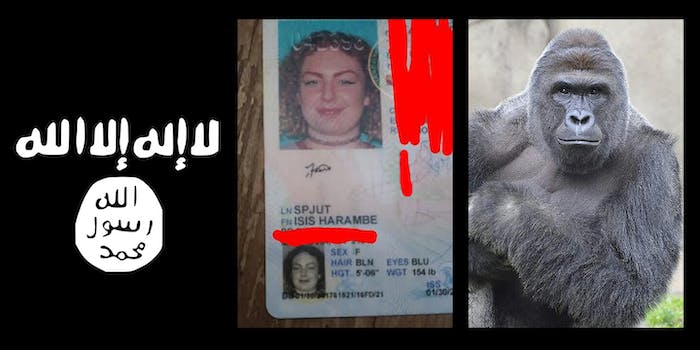 Isis Harambe is real—and so is her name

Stop me if you’ve heard this one before.

A parent, in order to provide a more viral future for their child, gives them a very unique name. Then, they infiltrate a group of neocon policymakers to persuade them to launch an ill-advised invasion of a Middle Eastern nation in an effort to destabilize the region and hope that a splinter organization rises from the warring factions. Then, over a decade later, they head to a zoo and cause an incident of such concern that authorities are forced to euthanize a beloved animal.

A tale as old as time, am I right? But enough about the guy named Al-Qaeda Tatiana the Siberian Tiger.

We’re talking about Isis Harambe, who yes, really exists—and the name is real, too, according to California authorities.

“I trip out with my name constantly,” Isis—whose full name is Isis Harambe Spjut—tells the Daily Dot. “Like, when I meet people [and] I tell them my name, they’re, ‘That’s crazy, that’s funny.’ I’m literally like, ‘No, that is the craziest name you’ve ever heard in your life.’ I really have the most unique name in the world. Pretty trippy.”

Spjut achieved internet notoriety this week when a man came into her restaurant and started bantering with her.

“He came into my work—I’m a hostess at a restaurant—he was flirting with me and then I told him my name and he didn’t believe me,” she says.

“I didn’t believe it,” says the man, @AndreGoLow. “I told her I was Andre MegaStalin.”

So, she sent him a photo of her ID to stamp out his doubts. He asked if he could tweet it out.

I was talking to someone and didn't believe her when she told me her name.

Spjut, by the way, might be the most badass part of the whole name. It means ‘spear’ in Scandinavian. Naturally, everyone screamed hoax.

If I were a bouncer, I wouldn't believe it.

“I’m not the type of person to do something for attention,” Spjut insists, shooting down accusations that she may have faked her own name. “I don’t know if they believe me, but who changes their name? People who go through that much effort just to get attention, I’m not down with that.”

When Spjut was born in 1998, a name like Isis Harambe—obscure as it may be—wouldn’t make anyone think twice. And her parents had reasons for choosing it.

“My parents, when I was born, they were both Rastafarians,” she said, saying why the defied convention. “So my mom kinda picked my first name, and ‘Isis’ was a Bob Dylan song, along with the Egyptian goddess, and then Harambe means ‘Harmony’ in Swahili, and my Dad picked my middle name.”

It wasn’t until 2014, with the rise of that ISIS that people started finding her name a bit unusual.

Like most good parents, though, the Spjuts don’t get the hullabaloo the web is making about it.

“It wasn’t really a thing [when Harambe, the gorilla, died]. They were just like, ‘That’s your name and that was the gorilla,’” she explains.

Now that ISIS is one of the most feared terrorist groups and the world, and Harambe is the patron saint of internet memes, even Spjut finds it ridiculous. “Isis Harambe, like, who, who—it’s just me, that’s so insane, it’s crazy to me,” she says. “I can’t believe it.”

And honestly, neither could we, so we checked with the California DMV. Turns out, Spjut’s ID isn’t a Photoshop job or a forgery. A clerk with the Information Release Unit confirmed California’s DMV issued a license to ‘Isis Harambe’ on Jan. 30, 2017, and that she most likely would have had to provide a birth certificate to get it.

Of course, Spjut could have legally changed her name to mash up a weird mix of a sadistic terrorist organization and the shooting death of a silverback gorilla, but she denies that.

“I don’t know what you want me to do,” she says. “You really aren’t given a choice [with your name].”