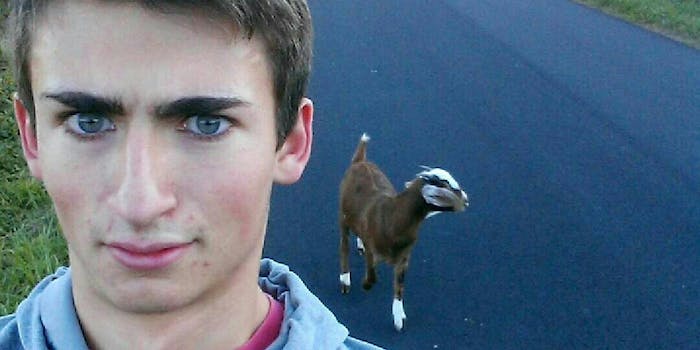 Why this man’s goat selfie became a Reddit phenomenon

It's a hairy situation.

One Reddit user got himself into a hairy situation after his selfie with a goat inspired a digital-altering bonanza.

While user Chirv was out for a run, a goat followed him for about two miles until the friendly mammal’s owner came to pick it up. He captured the moment and uploaded it to Reddit.

Instead of being amazed by the goat hot on Chirv’s trail, other Reddit users were distracted by something else: the poster’s eyebrows. And so began the content eruption:

While most people duke it out with their image-editing skills in r/photoshopbattles, the battle was on in this particular subredddit and thread. Some people might feel bullied by all the jokes about something like physical apperance, but Chirv looks to have enjoyed all the funny creations. He writes:

Obligatory “holy shit this blew up” Thanks for all the Photoshops and roasts. It’s great to laugh about yourself first thing in the morning. Reddit never disappoints

And at least he didn’t have to deal with one of those annoying screaming goats.