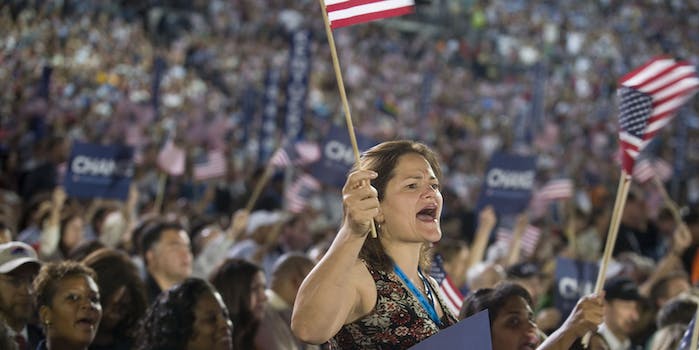 Why politics is the Internet’s new favorite sport

Politics is no longer just about civic action, but about helping your team win.

If Godwin’s Law suggests that a conversation on politics can’t go on long enough without someone comparing the topic at hand to Hitler, sports suggests an important corollary. Given an infinite amount of time on the same topic, someone will use a sports analogy to explain it.

Sports and politics are becoming increasingly inseparable and intertwined facets of American public life, an odd symbiotic relationship in which the president’s bowling score ends up an important talking point on his image. America is the land of the free, the brave, and the sports-obsessed, so much so that Hillary Clinton felt the need to weigh in on the Heat-Spurs matchup in the NBA finals; Clinton, ever the political pragmatist, of course went with Florida, the swing state. New Jersey governor Chris Christie’s own allegiance to the Dallas Cowboys is seen as part of his maverick appeal: He doesn’t care about appealing to anyone, not even local Jets and Giants fans.

On the opposite end of the spectrum, for every president carving a turkey during the iconic NFL Thanksgiving game or throwing the first pitch, there’s a former sports icon entering politics. In 2003, former Bulls player Bob Love ran an unsuccessful bid for the Chicago City Council, campaigning under the slogan “All You Need Is Love.” Meanwhile, legendary wrestler Jesse “The Body” Ventura’s political career proved more fruitful: Ventura served as the governor of Minnesota for four years.

The convergence model of sports and politics has reached a tipping point, though, in the era of social media, which allows Americans an amount of fan-like participation in the political sphere unheard of in previous generations. Although the Kennedys weren’t without their tabloid appeal and Clinton certainly had his fangirls (without them, the world wouldn’t have the name “Monica Lewinsky” etched in the tree trunk of history) digital engagement gives politics junkies an added investment in the outcome. Like rooting for your home team during a Sunday showtime, the ties between us and our parties speak to an important facet not just of our political allegiances but who we are as people.

As reports the Pew Research Center, Facebook has played an important role in shaping our political identities in the modern age, specifically how we build our own fan communities. “According to Pew’s ‘Civic Engagement in the Digital Age’ study, a full 39 percent of American adults ‘took part in some sort of political activity’ on a social network during the 2012 elections, whether that meant liking a candidate’s Facebook page, posting a political news story, encouraging another user to vote or several other actions,” Mashable’s Alex Fitzpatrick explained. “That percentage is up from 26 percent during the 2008 contest.”

Youth political involvement reached a notable peak during the 2008 elections, in which the Obama campaign galvanized the kinds of voters who notoriously stay away from the ballot box on voting days, but that doesn’t mean today’s Facebook user has become apolitical in the past six years. Sarah Stern of the League of Young Voters Education fund told the Huffington Post during the 2012 election that just because young voters weren’t excited about the candidates that doesn’t mean they weren’t ready for action: The Occupy Protests and Tea Party movements proved millennials were itching to paint their faces and shout from the political bleachers.

In fact, Pew has shown that online fandom is deeply linked to on-the-ground action; those who like a candidate’s page on Facebook are more likely to take a step further to get educated about the issues or donate to their campaign. That’s why Stern and others were behind MTV’s push during the 2012 contest to rock the vote through “Fantasy Elections.” Rather than its usual PSA-driven campaigns, the youth network decided to spread political awareness by applying a fantasy football model to the election.

For those who might be confused as to how that works exactly, the Huffington Post’s Rebecca Ballhaus explains: “Players and the other members of their league choose politicians, and lose or gain points based on their behavior, as judged by websites like PolitiFact.com and Project Vote Smart. When a politician performs poorly in the five categories—transparency, honesty, engagement, civility and public opinion—you lose points. When he or she performs well—for example, by posting a Facebook status or Twitter update to engage with his constituents—you gain points.”

A post-mortem on MTV’s digital campaign from Gamification.co’s Heong Weng Mak argued that the “Fantasy Elections” were an important step forward in thinking about how we engage digital fandoms. “With the advent of an information-rich society and increasingly prevalent gamified culture among youth, the use of gamification covering serious topics such as political action and global health interventions may be the answer to engaging a disenchanted target audience,” Mak said. “MTV’s decision to employ gamification to engage a young audience on civic action is a precedent for other companies to follow.”

And Jason Rzepka, MTV’s vice president of public affairs, added in an interview with CNN that applying a game model to politics can help hold politicians accountable by forcing voters to think about things like transparency in new ways. “This can be a crash course in what people should demand from those pursuing the privilege of elected office,” Rzepka said. By getting the audience to think about politics as their favorite sport and a candidate’s qualities like baseball or football statistics, the kind you might consider when scouting candidates for your fantasy roster, it can help speak to voters in new and crucial ways. If anything, it sure beats handing out Obama/Biden flyers on the college quad.

The relationship between sports and politics in the United States is ripe for gamification, particularly because so many analysts argue they’re basically the same thing. “[P]olitics itself is sport,” wrote Patrick Rishe in a 2011 column for Forbes. “Its rivals trying to win your vote, and well-funded candidates often have the edge because their campaign can afford greater marketing and advertising resources to spread their message.” According to Pew, even the way we talk about politics sounds like a football game: “What we see in our social media research more broadly is that [social media] offers an avenue for really engaged people to go out and root for their team basically, and try to support their team and accomplishing some objective.”

In an interview with PBS, the MIT Center for Civic Media’s Chris Peterson explained that this relationship is only to the benefit of political participation in the long run. The more we engage our politics like we engage our Sunday game-days, the more likely we are to follow the action or be invested in the outcome. “If it’s a football game, I’ll watch every play, but look down between plays to read analysis, laugh at GIFs, or post a reaction of my own,” Peterson told PBS. “If it’s politics, I’ll probably spend most of my time looking at the thread and listening to what’s going on while commenting and reading other comments.”

If there’s an issue in engaging with political fan communities, it’s that they’re bound to be a lot like the folks we tailgate with: People who think, look, and dress like us, fellow diehards who are all rooting for the same team. Embracing the gamification of politics might help us all to cheer a little more loudly for our guys, but when everyone around us on Facebook or Twitter is in our section, how likely are we to hear the other side?

That’s a problem that has long plagued American politics, one unlikely to be solved by fantasy football. But if we all want to win at politics, we need to start thinking about how to play the game a little differently next time.