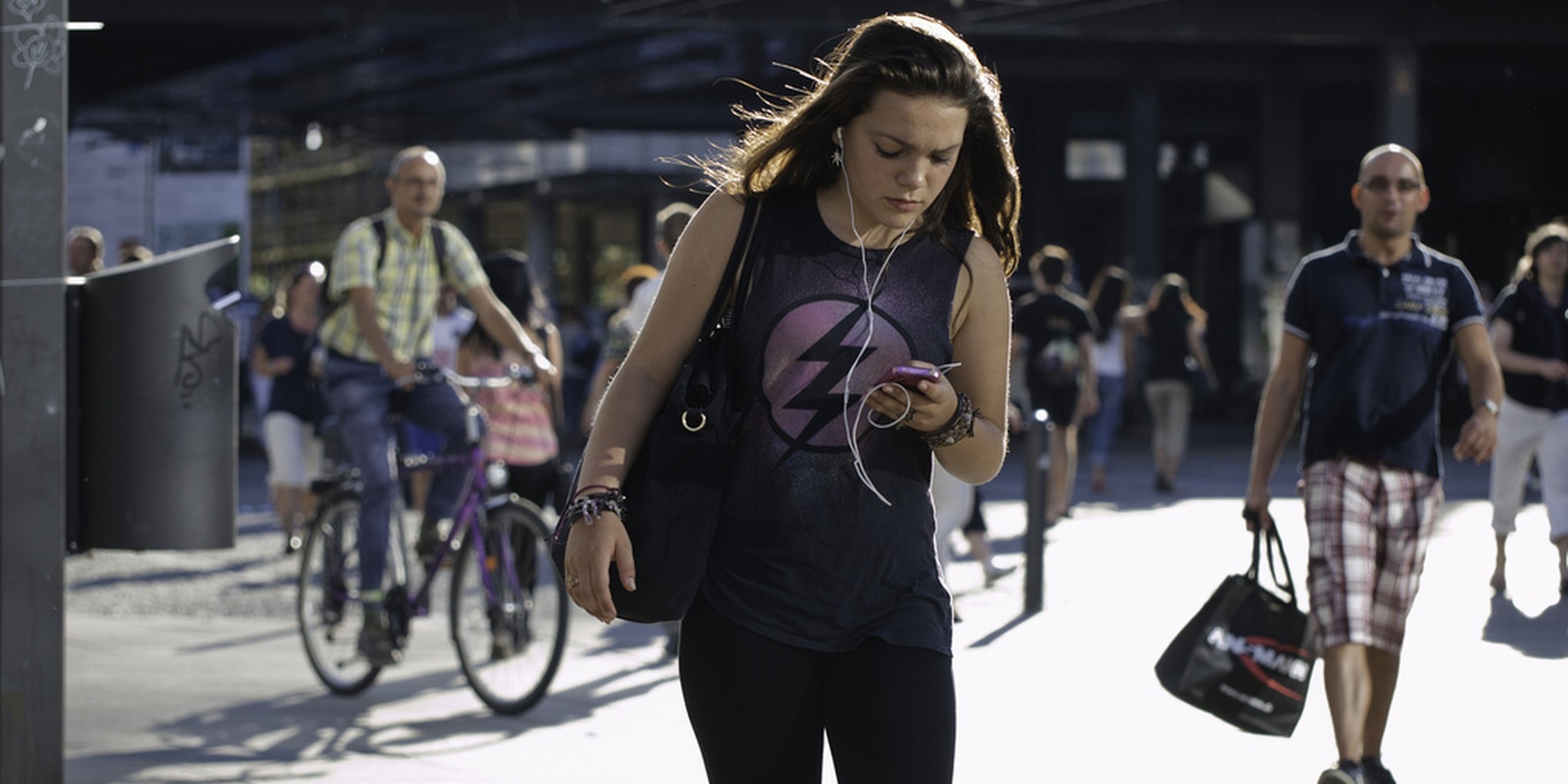 The Intercept, Glenn Greenwald and Pierre Omidyar’s new online publication, pitches itself as a place for “fearless, adversarial journalism.” And until recently, I wouldn’t have doubted it—Greenwald’s reporting on NSA surveillance has been vital, insightful, and aggressive, for one. But their recent articles on Serial, the uber-popular podcast from the producers of This American Life, are making me question whether they’re being adversarial just so they can say they are.

Over the last two months, they’ve landed exclusive and wide-ranging interviews with two figures involved in the “Serial” drama: Jay Wilds, who testified (and largely made the case) against Adnan Syed, and Kevin Urick, the lead prosecutor on the case. The interviews were catnip for anyone who loved Serial—I count myself among those—because neither Wilds nor Urick were interviewed to any extent for the podcast, largely because they declined to participate. (More on that in a bit.)

But in the process of publishing the interviews, the two main authors—Natasha Vargas-Cooper and Ken Silverstein—adopted a strange editorial strategy. Instead of allowing the interviews to stand by themselves and letting the legion of people who are obsessed with Serial draw their own conclusions as to Syed’s guilt or innocence, they chose to take the stand that the interviews alone prove that the case against Syed was solid and that, yes, he killed Hae Min Lee in 1999.

It didn’t so much come out in the three-part interview with Wilds, but it became a defining element of the interview with Urick. In a 1,400-word introduction to the interview, Vargas-Cooper and Silverstein editorialized not only that Urick’s claims back up Syed’s guilt, but that Serial’s Sarah Koenig never made much of an effort to contact him and get his side of the story. From this, they concluded: “The justice system in America frequently doesn’t work. This is not one of those cases.”

I was floored by their judgement. Not because I believe that Syed is necessarily innocent, but because I couldn’t believe that they would conclude that he is certainly and undeniably guilty—and reach this conclusion based on little more than the words of Wilds and Urick, two characters in the drama that have very clear reasons to insist today that Syed is as guilty as he was 15 years ago.

Silverstein has hinted that he’s taken the position that Syed is guilty not because he actually believes it to be true but because it’s the adversarial thing to do.

Ever since the interview with Urick was published, both Vargas-Cooper and Silverstein have posted defensive and, in many cases, snarky, tweets brushing aside criticisms of their editorializing. They dug even deeper on Friday, when three corrections—one pretty significant—and a few editor’s notes were appended to their interview with Urick. (Silverstein weirdly called them “needed but irrelevant.” What?) In the process, Silverstein has hinted that he’s taken the position that Syed is guilty not because he actually believes it to be true—or has the evidence to back it up—but because it’s the adversarial thing to do.

Being adversarial is an important trait for a journalist. It’s my profession. I get why you need to be consistently skeptical, especially of those in positions of authority. And yes, being contrarian and saying things others don’t like to hear is often invaluable; in his strident reporting and editorializing on the NSA and civil liberties over the last few years, Greenwald has powerfully made this point. But Vargas-Cooper and Silverstein seem to take being adversarial as its own virtue—truth and evidence don’t really matter, as long as what you’re saying cuts against the grain.

The weirdest thing about this all is that they’re picking a side when Serial did no such thing. In fact, one of the frustrations expressed with the podcast was that there was no big satisfying finale; listeners were left with the equivalent of, “Well, despite a year’s worth of digging and 12 episodes worth of content, we don’t really know what happened.” Worse still, they’ve picked it based on what seems to be very limited information—two interviews. Maybe Vargas-Cooper and Silverstein are sitting on a year’s worth of investigating to dismantle Serial, but if they are, they certainly haven’t rolled it out yet. (“If you’re wondering we did not just take a prosecutors word, we have done our own investigation THANKUVERYMUCH,” tweeted Vargas-Cooper this week. The fruits of that investigation haven’t yet been made clear to anyone, though.) All they have is what Wilds and Urick told them.

You’d expect an “adversial” journalist to be much more, well, adversarial when it’s an agent of the state making a specific claim.

And that’s one of the biggest problems, in my opinion. Wilds was the guy whose testimony (and the many variations of it) largely got Syed sent to jail. Urick is the guy who put him on the stand and built the rest of the case around what Wilds said. Any journalist would take what they have to say with a grain of salt; they both have a very good reason to stick to their guns, after all. But Vargas-Cooper and Silverstein seem to be taking it as gospel, especially what Urick said. I’ve had lots of trouble squaring the fact that two adversarial-minded journalists are simply taking a prosecutor and his main witness—a guy who changed his story multiple times, including in the interview he did with them—on their word, and not pushing back on anything they’ve had to to say. It’s even weirder because you’d expect an “adversial” journalist to be much more, well, adversarial when it’s an agent of the state—in this case, a prosecutor—making a specific claim. But they’re not. And they accuse Serial of being the biased one.

“Serial was strangely biased towards a man who was convicted, on the basis of strong evidence, of strangling a teenaged girl to death,” tweeted Silverstein this week, seemingly unaware of the obvious bias that would come from relying on only Wilds and Urick to conclude that Syed is, in fact, guilty.

But that’s where Vargas-Cooper and Silverstein are: Syed is guilty because Wilds and Urick say so. “Adnan Syed murdered Hae Min Lee. To state the obvious,” tweeted Silverstein this week. “No one ever convicted of a crime in America is guilty. This sophisticated argument of pro-Serial drones,” he added. “Many people are wrongfully convicted, but sometimes people are rightfully convicted,” said Sharon Weinberger, an editor who worked with Vargas-Cooper and Silverstein on the interviews. “You know, sometimes the state gets it right,” tweeted Vargas-Cooper. (And yes, he was found guilty by a jury of his peers. But juries have gotten things wrong in the past, a point any “adversarial” journalist would easily concede.)

But more than simply try and say Serial was wrong on a conclusion it never reached, Vargas-Cooper and Silverstein also did something much more serious: They questioned Koenig’s journalistic ethics. In the original interview with Urick, he claimed: “They never showed up at my office.” The message is clear: Koenig and the Serial staff never even bothered to get my side of the story. That’s a serious allegation, and one that would sink many stories and journalistic careers.

But in the corrections appended days after the interview ran, the Intercept’s editors admitted that Urick’s quote was shortened. The part that was excluded: “They may have left a voicemail that I didn’t return but I am not sure of that.” That’s a huge omission. The narrative suddenly shifts from “They didn’t even try to contact me” to “They may have tried but I don’t really remember.” And Serial itself is fighting back on this one: In a series of tweets this week, it insisted that Koenig tried multiple times to get in touch with Urick. (She got in touch with Wilds, but he apparently did not want to take part in Serial.)

If you’re going to make that point so definitively, you better bring the goods.

There might be something to what Vargas-Cooper and Silverstein are saying. Maybe Syed is truly guilty—again, Serial never said he was or wasn’t—and Serial was just a massively unethical and misguided attempt to chip away at the reality that he killed someone. But if you’re going to make that point so definitively—and defiantly, I might add—you better bring the goods. Two interviews with people with ulterior motives won’t do it, much less when you don’t push back on those very people during the interviews. Maybe Vargas-Cooper and Silverstein are sitting on a mountain of evidence to make their point, but if that’s the case, they should really come out with it—and soon. (A second portion of the interview with Urick was supposed to be published this week, but it wasn’t.) If they don’t, it’s going to continue looking like they’re simply trying to chip away at a podcast that was massively popular because, well, it was massively popular. And yes, being adversarial does sometimes require taking on those sacred cows, but it also demands that you can make your point beyond a reasonable doubt.

So far, Vargas-Cooper and Silverstein haven’t come close. In fact, they’ve come off as trolls—people who like to be contrarian because they like to pick fights. For this, I point to another Silverstein tweet: “I enjoy taking candy from babies which is why it’s so much fun to piss off Serial drones.”

If all you set out to do is piss people off, great. But don’t try to pretend it’s always “fearless, adversarial” journalism.