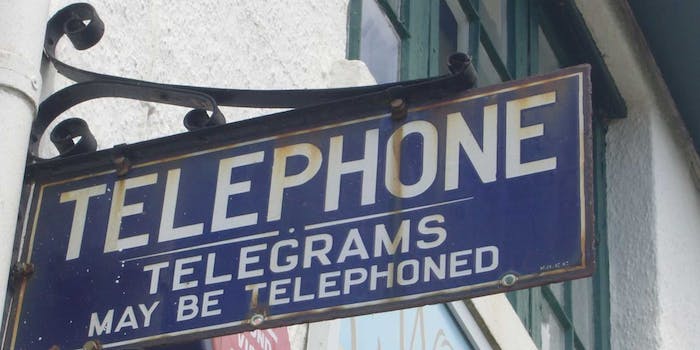 How email killed the telegraph in India

Not so long ago, India’s state-run telegraph service was at the peak of its popularity.

Not so long ago, India’s state-run Bharat Sanchar Nigam Limited’s telegraph service was at the peak of its popularity. According to the Christian Science Monitor, in the mid-1980s, the company had more than 45,000 offices across the country. But, in the past decade, the BSNL has struggled to compete with mobile technologies. Today it maintains only about 75 telegraph offices. One of which, on July 15th, will transmit India’s last telegram.

Up until recently, the 160-year-old telegraph industry attracted customers looking for a fast and efficient alternative to the postal service. Within the past decade, however, email and text message providers have undercut the BSNL in much the same way. “We were incurring losses of over $23 million a year because SMS and smartphones have rendered this service redundant,” the company’s general manager of telegraph services told the Monitor.

Mobile phone and Internet usage have spread rapidly across India. Already, almost half of adults between the ages of 18 to 24 are on the Internet. And, according to a report by the Boston Consulting Group, the number of overall Internet users in India is expected to triple by 2016. As the Monitor pointed out, “penetration is indeed a dismal 26 percent, but even in the remotest village, at least someone has a phone.”

Over the years, the company has tried to adapt. They raised prices and modernized their service, digitizing the transmission of messages. But the end result was something not unlike a prehistoric email provider: Employees enter messages into a computer, sending them across the country electronically, where they are at last printed out and hand-delivered to recipients. All at a cost of roughly 47 cents per 50 words, reported the BBC.

When the last telegram is sent on the night of July 14, it will be housed in a museum, a remembrance of the invention that wove the world together, paved the way for telephones and computers and—like so many of the best technologies—was eventually rendered obsolete by its own successors.