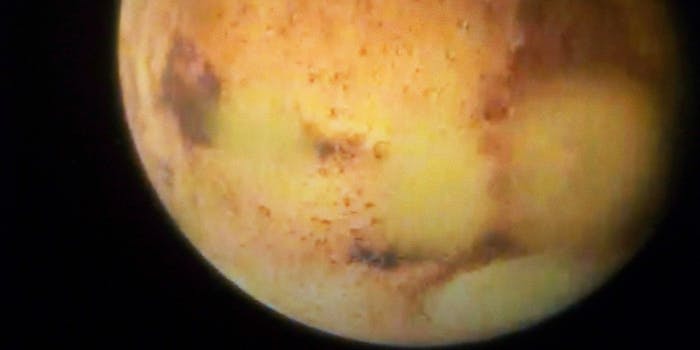 If India's first Mars mission is successful, it could accelerate a space race in Asia.

India’s first mission to Mars is underway. On Tuesday, the country’s Mangalyaan—a.k.a. “Mars craft”—successfully lifted off from Satish Dhawan Space Centre, beginning its 300-day journey to the red planet. If all goes according to plan, the unmanned craft should arrive in September 2014, making India only the fourth space power to make the trip, behind the U.S., Soviet Union, and Europe. Here’s a video of the launch:

When you watch this launch video, you’re seeing more than just the start of a Mars mission.

As CNN points out, this could signal the beginning of a space race in Asia. China, Japan, and India are the forerunners in the region. Early this year, in a joint mission with Russia, China attempted but failed to reach Mars.

India’s space ambitions extend well beyond the Mars mission. The country is scheduled to conduct a manned space-flight mission in 2016. Why so much interest in space? Russell Boyce, a professor at the Australian Academy of Science, told CNN, “There’s a growing realization if you’re engaged in space, if you have access to space assets and space-based information, then you stand to gain economically, and in terms of prestige as a nation.”