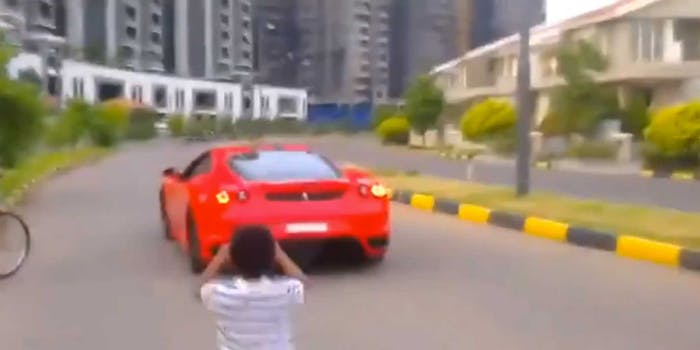 After evidence of the crime went viral on YouTube, the man was forced to post bail and his car was impounded. But it wasn't the first offense, nor will it be his last.

If you’re going to let your child drive your Ferrari as a birthday present, you probably shouldn’t upload evidence to YouTube.

Police arrested Mohammed Nisham on Monday for endangering the life of a child and allowing a minor to drive in the Indian state of Kerala after a clip of his son driving a Ferrari F430 went viral on YouTube. He was released after he posted 5,000 rupees ($92) for bail, and the car has been impounded.

The current legal driving age in India is 18.

The original video was filmed by Nisham’s wife and showed the couple’s 9-year-old son behind the wheel and his 5-year-old brother in the passenger seat.

According to police, the test drive took place on a private road, and Nisham gave permission since he “knew there would be no accident.”

The video created public outrage across India after it landed on YouTube. Nisham, who owns 18 cars worth about $4 million, turned himself into police near Kochi.

This wasn’t the first time that the 9-year-old had gotten behind the wheel. He’s been driving since he was 5 and has also driven a Lamborghini and Bentley, among others, effectively putting my old Barbie convertible to shame.

“It was his ninth birthday, and since he was insisting for months, we allowed him to drive the Ferrari. He is a cautious and confident driver,” Amal Nisham, the boy’s mother, told the television station NDTV. “It’s not easy for a child to achieve such a feat at this young age.”

Nisham, for his part, didn’t think that the video would blow up after posting it on YouTube. He just wants to encourage his son’s passion and hopes that he will become a successful Formula One driver some day.

“We did not expect this kind of furor after we uploaded that video on YouTube,” he told The Times of India. “Anyway, unlike in Kerala, I don’t think there should be any problem for a boy to try out a car in other states, especially when we ensure that it is done with utmost safety.”

He still plans to let his son drive the new Lamborghini on the deserted roads located outside his tobacco factory.

Or maybe next year, just get him a go-kart.