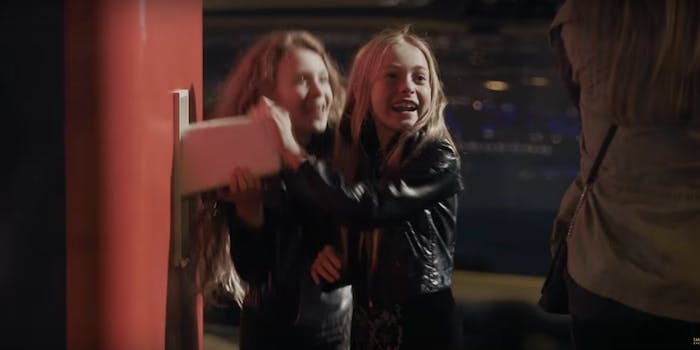 It's simple but spectacular.

Improv Everywhere is perhaps best known for their annual no pants subway ride, but they’ve been stepping up their holiday prank game for some time. Last year they staged a feat of epic caroling, and this year’s prank is simple but stunning.

Charlie Todd, the leader of the “prank collective,” worked with his team to erect a 7-foot-tall light switch in New York City’s Father Demo Square. Passersby were then invited to flick the switch, and the results were dazzling: 50,000 Christmas lights came on at once.

Todd describes the prank in detail on his website, but he told the Daily Dot that his inspiration for the light switch was simple. “I’ve always found giant versions of household objects to be hilarious, so the thought of a giant light switch that controlled a giant number of lights really made me laugh.”

The people interacting with the switch, young and old, all appear startled and thrilled. Watching the video, it’s hard not to feel like an envious toddler who really wants to play with this new toy.

Todd was delighted to see how much people enjoyed the display. “It was really fun to see the smiles on people’s faces as they interacted with it.”