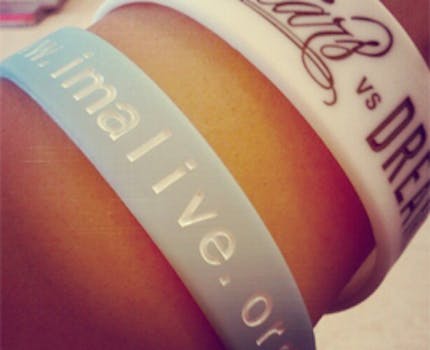 A closer look at this Internet counseling service raises many more troubling questions than it answers.

Conventional wisdom holds that the Internet is no substitute for a face-to-face conversation when you need to talk about something important. Yet one Internet-based suicide hotline is taking the opposite bet.

A closer look at this Internet counseling service, however, raises many more troubling questions than it answers, like where does the money go, why is it only online 3 hours a day—and why do counselors have to fundraise nearly $300 just to talk to someone on the Internet?

To quote one potential volunteer, “Does that seem incredibly odd to anyone else?”

In a Tumblr post which has since been deleted but which survives thanks to 21,000 notes and reblogs, agentcoulsonsupernanny linked to the IMAlive website with the praise, “HOLY SHIT THIS IS THE COOLEST THING:”

I’ve spoken to people mid-crisis who ABSOLUTELY REFUSE to call a number, because you know what? Talking on the phone fucking blows. IM is alright, typing things out to a faceless screen, it’s so much easier than using your voice most of the time. If only there was some sort of chat-based hotline-

IMAlive is an IM-based support center, run entirely by well-trained volunteers who seriously do give a shit. It’s free, it’s confidential, and it WORKS.

Like many other trainees, whatthefuckjazmine started the process to become a volunteer after reading this Tumblr post. She told the Daily Dot:

When I read about IMAlive, I thought about all my friends that I’ve lost to suicide that just didn’t want to talk to someone from the sheer paranoia of getting thrown in a hospital. I thought IMAlive is [an] innovative step in saving these people and just extending a hand to anyone in crisis that needs someone. I read all that and reviews of the site, watched videos, and I just knew I had to be a part of it.

IMAlive sounds perfect for introverts and those who are more comfortable writing than speaking. And anyone can volunteer to be a counselor, as long as they pass the background check.

But there’s a hitch. Potential volunteers have to pay the organization $280 up front—before they even have their first IM session.

First there’s the $30 fee trainees fork over for the background check—a fee that many organizations and businesses cover while screening applicants. Then there’s the $250 training and certification fee. Because this can be a steep obstacle for many volunteers, the website encourages potential trainees to do fundraising in order to increase awareness for the project as well as set them on the path towards becoming a volunteer counselor.

The website FAQ states that $150 of the fee goes to cover the cost of online coursework: “Online Counseling and Suicide Intervention Specialist” certification. IMAlive volunteers receive a special discount for the coursework, which normally costs between $400 to 500.

In addition to the 20 to 40 hours of study that the coursework demands, counselors must complete an additional 200 hours of hands-on volunteer work the first year after being trained. But this might be harder than it seems, considering that despite the long list of available volunteers, currently the crisis center only operates a few hours a day, weekdays in the evening from 7-10:30pm ET.

IMAlive’s coursework partner, the QPR Institute, states that “when people are in a suicidal crisis they need help NOW! For online suicide crisis intervention to be effective it must be accessible, available 24/7…”  Tumblr user fashionablymodest agreed. “If I feel like I am so depressed and miserable that I want to kill myself, why would I wait for the site to be online at 7pm the next day?”

IMAlive promises that “[a]s IMAlive get more trained and certified volunteers, there will be more shifts available.” Some Tumblr users, confused by the lack of availability, have also noted that the site requires those seeking counseling to have broadband access.

Beyond questions of volunteer training and availability are even more troubling questions surrounding IMAlive’s two parent organizations, nonprofit clothing line To Write Love On Her Arms (TWLOHA) and suicide hotline network Hopeline. IMAlive’s creator, Jamie Tworkowski, founded TWLOHA, which began as the darling of Myspace. Bands like Paramore later jettisoned their association with the program when word surfaced that it contributes only 10 percent of its million-dollar annual revenue to actual treatment and recovery. The rest goes to production of its popular clothing line, administrative fees, appearances with bands, and travel to conventions to promote the project.

TWLOHA, which started as a project from Christian nonprofit booster Fireproof Ministries, also ran into controversy when supporters learned that one of its affiliates was Mercy Ministries, a Southern help center known for practicing gay conversion therapy and even exorcisms. TWLOHA also gave funds to Teen Challenge, a Texas-based therapy center that emphasized Christian evangelism as part of its mission. Though TWLOHA eventually distanced itself from Mercy Ministries and Teen Challenge, it did so only after coming under fire for supporting them.

Chloe Grabanski, director of fundraising at TWLOHA, has responded via Tumblr post to the main charges leveled against TWLOHA, noting that TWLOHA participates in queer-friendly projects like It Gets Better and claiming that the organization’s focus on clothing—rather than on actual therapy—helps to raise awareness as well as fundraise. And controversy didn’t stop TWLOHA from winning Mashable’s 2011 Must-follow Non Profit award. It also won a $1 mllion grant from the Chase Foundation in what was essentially an online popularity contest, buoyed by support from celebrities like Miley Cyrus.

Last year, Tworkowski used the recent boost in funds and stature to partner with the Kristin Brooks Hope Center, better known as 1-800-Suicide or Hopeline. Together, they formed IMAlive.

While TWLOHA is a certified tax-exempt no-profit, the IRS has revoked Hopeline’s tax-exempt status, after it failed to provide its annual returns to the government for three years in a row. Its website still boasts that it is a “Top Rated Nonprofit” and a “not-for-profit 501(c)3 organization,” but this is clearly a misleading claim. Attempts to clarify the organization’s tax-exempt status with Hopeline’s president, Reese Butler, were unreturned at press time.

In its last public financial statement from 2008, Hopeline boasted expenses of only 20 percent of its million-dollar revenue. With both organizations apparently well-heeled for funding IMAlive, it’s perplexing that volunteers have to fundraise their own training. And as for donors, IMAlive states that they cover “the cost of IMAlive chats (we estimate that the average cost per chat is $5) and IMAlive supervisors.” Granted, $5 per chat is chump change when weighed in the balance against a suicidal person’s life; but it’s a strangely high number, considering that chat clients are inexpensive and trainees pay for their own Internet access independently.

Finally, there’s the question of what exactly Hopeline’s therapy strategies are. Its website promises visitors that by speaking to their counselors, “you will find the only clear, step-by-step path for you to follow out of the darkness”—phrasing that belongs in a Bible Study group, perhaps, but not on a certified counseling website.

And what of the rest of that $250 IMAlive training fee? The part not paying for actual training goes to “hands-on Competency Certification.”  This seems like a legitimate use, until you realize that if at any time you have to quit the program or can’t find the time to complete your training fast enough, your entire fee is nonrefundable—even the part that applies to training you may not have had yet.

Jazmine isn’t bothered. “With the fundraising, I’ve already made a nice $30 which will over my application/background check, which is awesome!” she told the Dot. “When I get closer to having to pay that $250, I was going to really boost my signal for donations but just having that first bit covered means the world to me.

“It may be pricey and time-consuming, but to know that I could have a chance and really being a big help to someone (and maybe even save their life!) made me look over all that red tape and just do my best to get into the program.”

It’s easy to see, with bullying, cries for help, and suicide notes all occurring online more and more frequently, how easy it can be for potential volunteers to want to “look over all that red tape” and jump right in. But with IMAlive’s parent organizations, financial structure, and limited availability setting off warning alerts, it’s a good idea for potential volunteers to look before they leap. Or before they fork over $280.

In the long run, it might be easier—not to mention cheaper—for troubled netizens and their friends to find other ways to talk.