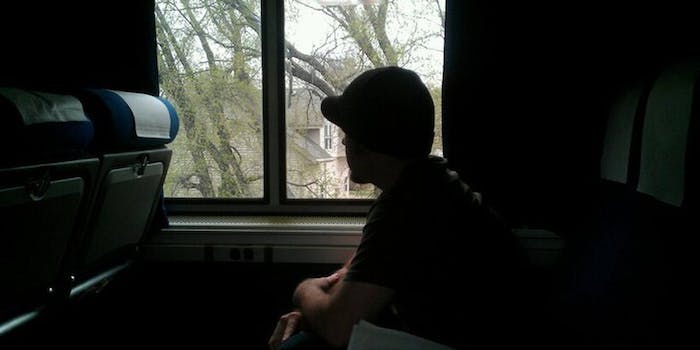 Bradord Barrington inspired Reddit with his two-month-long train trip across the U.S. and then turned to the community to crowdsource his book about it.

Bradford Barrington, a 28-year-old from Colorado who goes by isthisadream on the social news site, posted an AMA (ask me anything) last July. He had been on a two-month trip around the U.S. by train, after quitting his job and breaking up with his longtime girlfriend. He figured that he would just get a couple of messages and upvotes and that would be it.

Instead his thread made the front page, inspired people to embark on journeys of their own, and gave someone the push to divorce his wife. The thread has over 1.7 million subscribers, and people continued to send him messages until about a month ago. Barrington even made a subreddit for those attempting their own life-changing trip.

“It’s really overwhelming,” Barrington told the Daily Dot. “I never really thought it would lead to stuff like that, but every time that I’ve heard about it I think it’s just awesome.”

Barrington made a promise to some of the redditors he privately messaged, a statement of intention he revealed in one of his updates to the thread.

“I made a promise in some of my pm’s and replies that I’d write out a book of my travels for you all and so that’s what I am going to do… I just don’t know quite how to do it,” he wrote. “Expect it to be in the vein of an adventure tale, since that’s what I enjoy writing in my spare time.”

And last month—exactly one year after the original post—Barrington made good on his word. He revealed that he had published his book, I Chose the Rails, in paperback format and for the Kindle in another AMA, which also made Reddit’s front page. The books sell for $5, but originally he wanted to give the book away for free.

“I have trouble just straight selling things to people,” he said. “I feel like I’m being greedy.”

In true Reddit fashion, he decided to give 20 percent of his profits to charity and even allowed people to vote for which charity he should donate to. He doesn’t have a definite winner yet but will update redditors with a photograph of the check when he gets a final number.

Barrington took a year to write, edit, and publish the book, but even in terms of self-publishing he went a different route than most. After working on his own for three months, he found his editor and the artist who designed his book cover on—you guessed it—Reddit.

“I’ve never written a book in my life so it was really just do the best I could,” he said. “I posted on Reddit that I was writing this book and that’s when I got my editor onboard.”

Instead of putting a call out for someone to design his book cover, he sought out redditor must_draw_cats, and she agreed to work with him after he showed her what he was interested in doing.

“[Reddit’s] such a good resource,” Barrington said. “You have such a variety of talent at your fingertips when you’re on the Internet. It’ll allow you to access the individuals that you can’t do in the real world.”

Barrington cites the Reddit community as the driving force to finish his book and even mentioned them in his dedication.

“Honestly I’m not sure if I’d done it if I had not been receiving more messages,” he said. “Some of them were really real and personal, but I think redditors in general gave me the strength to finish it.”