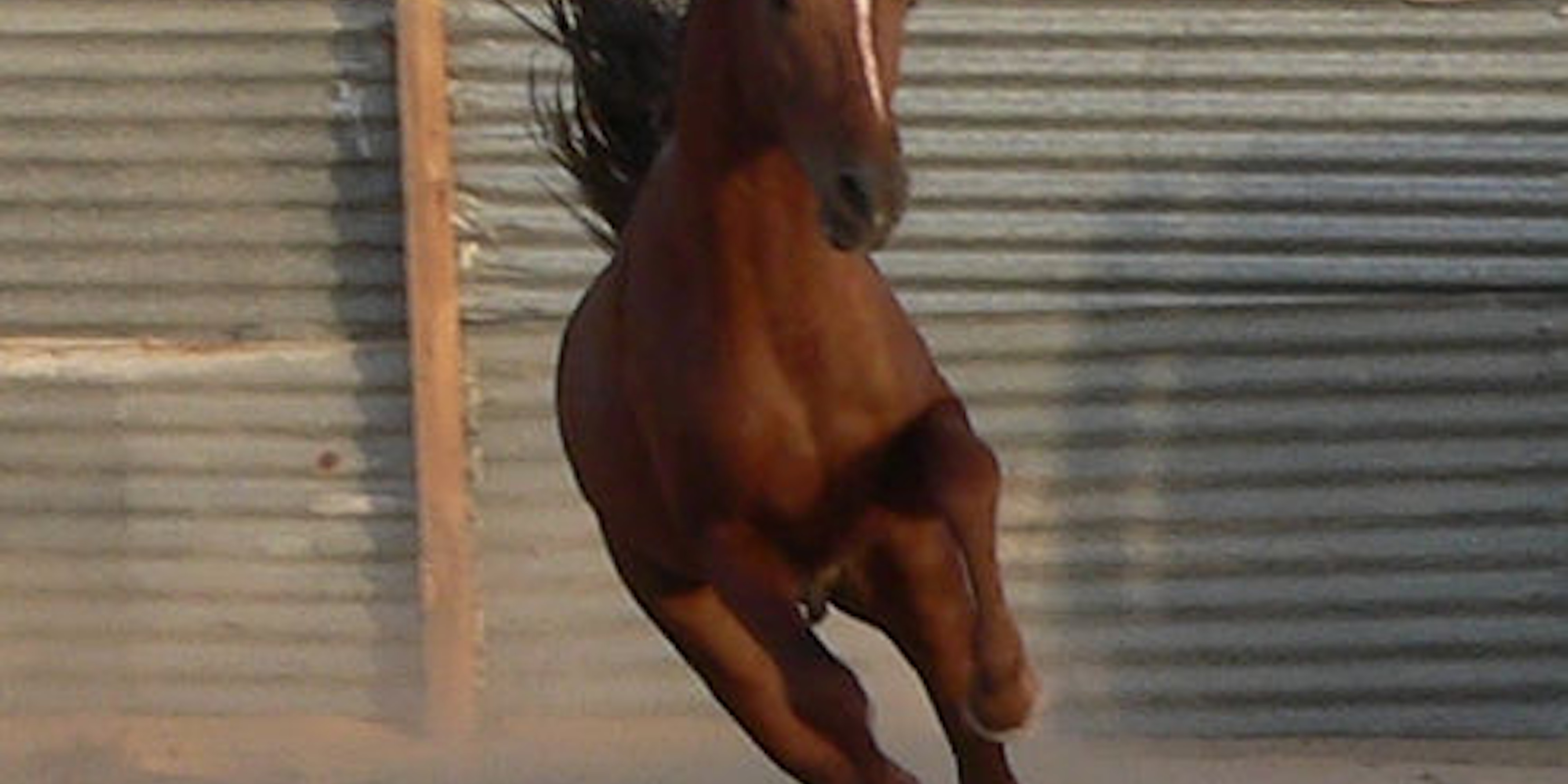 There’s a certain allure to @Horse_ebooks’ tweets. In between spam links, the bot account tweets random bits of passages that come across as wistful, incomplete thoughts, trailing  into the Twitter ether—mere echoes of an idea.

“If you look at any selection of 10 or 15 of his tweets, they already feel like poetry,” Kimberly Walters told the Daily Dot.

“Just little broken parts. They’re little puzzle pieces that I instinctively wanted to put back together. I like chaos and @Horse_ebooks is to some extent chaotic”

Declared “the best Twitter account that has ever existed” by Splitsider’s John Herman, the unintentionally profound nature of @Horse_ebooks has attracted a cult-like audience—127,448 followers as of this writing— and has inspired a slew of imitators, an annotated guide, T-shirts, and in Walter’s case, Twitter poems.

The 22-year-old Chicago resident, who goes by @aRealLiveGhost on Twitter, rearranges @Horse_ebooks tweets into linear prose. She posts screengrabs of the completed works on Twitter and Tumblr. Some of them have also appeared on Slackstory, which commissioned five exclusive poems.

The response on Twitter was immediate, positive, and surprising.

“I originally posted three poems and people were saying ‘Whoa, what is this? This is cool!,” she recounts. “I figured other people were doing what I was doing already.”

Thematically, her @Horse_ebooks poems tend to lean towards the apocalyptic and tumultuous, topics she touches upon in her own work.

“I recently started writing poetry again about the same time as I started with the @Horse_ebooks stuff,” Walters said. “They’ve been influence each other.

“I think in a lot of ways my own writing informed how I rearranged the tweets. I was looking for ones that sounded like me.”

With Walters’ permission, we’ve posted two poems she considers to be her favorite.

here is a breakdown honey 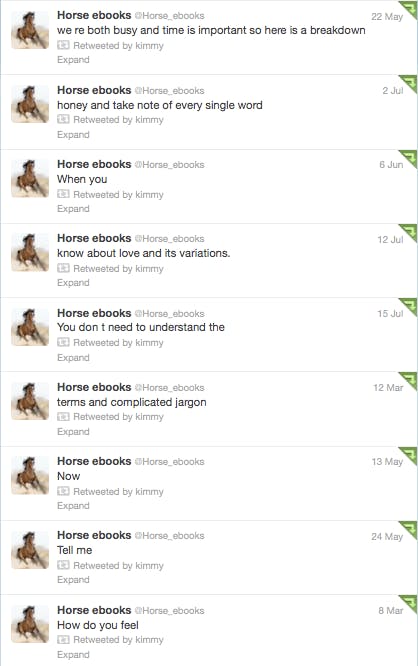 pep talk at the end of the world 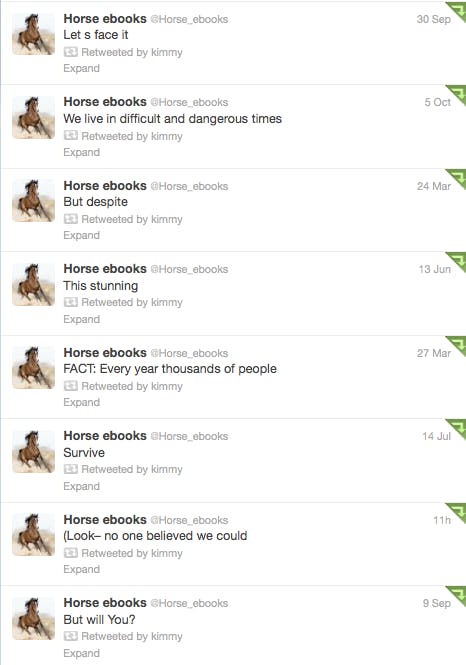 Walters’ process is far more elaborate than just hitting the retweet button. She uses a Word document to keep track of her work, copying and pasting tweets she likes into a sprawling master document. She then starts piecing the bits of text in a second tabbed document, working on it for as long as she can until she hits a wall.

“If I get stuck where I don’t know how to finish one, I’ll just leave it,” she tells me. “I have a lot of unfinished ones on my computer.”

Once a poem is completed, Walters then goes back to Twitter to retweet the @Horse_ebooks copy in the right order, using a private handle so as to not annoy those that follow her. Finally, she takes a screenshot of hew newly created poem and posts it on her public account and on Tumblr.

Towards the end of our interview, I asked Walters if she was familiar with Erin Watson, another Chicagoan who successfully funded a chapbook of poems inspired by @Horse_ebooks on Kickstarter.

“We wanted to meet since we both have a similar relationship to @Horse_ebooks,” she gushed. “We’re grabbing coffee soon and I’m really excited. “I think it’s cool that we’re using the tweets for similar purposes.”