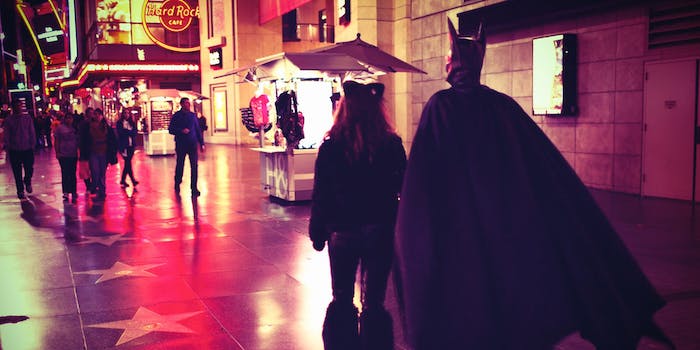 A superhero fight broke out on Hollywood Boulevard

Even Jimmy Kimmel is involved—and not in the way you'd think.

Times Square isn’t the only place whose mascots aren’t behaving themselves.

In an incident that sounds like one giant movie mashup, Chewbacca had to step in after a fight broke out on Hollywood Blvd. in Los Angeles, Calif., between Mr. Incredible and Batgirl, with some aid from Freddy Krueger and Waldo. We don’t know what started the altercation, but Mr. Incredible doesn’t really seem that incredible. Instead, he looks pissed.

Because the list of characters involved in the scuffle wasn’t long enough, Elsa from Frozen made a random appearance as a bystander as well.

Police are now reviewing the footage of the brawl.

“The good ones, we’re stationary, we’ll stand against the curb, people come to us,” a Batman performer told CBS. “But the bad ones they roam up and down, so they cross paths or they target the same people, and then they get into each other. It’s less now because we have a lot more police presence here since last year, and it has made a difference. It’s not cleaned up yet, but it is getting better.”

Even Jimmy Kimmel is getting involved. He hasn’t revealed himself to be the person behind the video, but the scuffle of super proportions occurred near the building where the show shoots. Determined to get to the bottom of it, Kimmel formed a “Justice League” and tried to investigate.