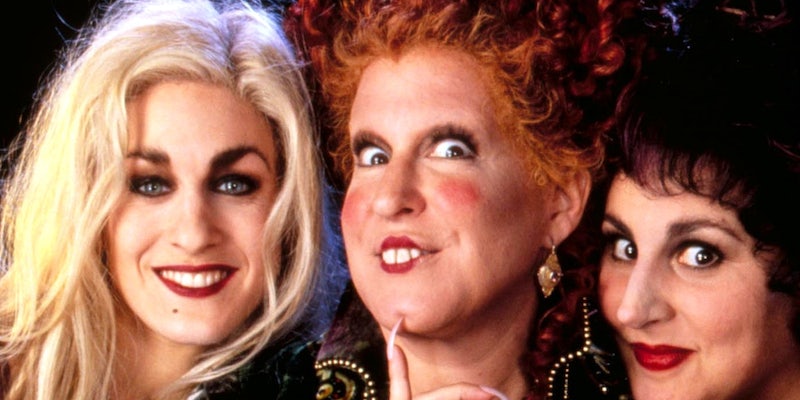 Why ‘Hocus Pocus 2’ is the sequel the Internet deserves

Hocus Pocus helped define an integral facet of how we understand culture in the Internet age, the ways in which we remix the past to improve upon it.

Last week marked an observance nearly as perennial as watching Hocus Pocus at Halloween: the Internet collectively freaking out over the possibility of a sequel. When asked about doing a Hocus Pocus 2 during a Reddit AMA, star Bette Midler said she and her sisters would be on board: “Inundate the Disney company, because I have canvassed the girls and they are willing to do it, but we have no say in it, so if you want a HOCUS POCUS 2, ask the Walt Disney company.” This news follows a debunked rumor last year that Tina Fey would be adapting a remake/sequel as a starring vehicle for herself and Melissa McCarthy, who would ostensibly play the Kathy Najimy role.

In the case of Hocus Pocus, the most interesting part of the discussion isn’t a matter of will they/won’t they—if we got two Dumb and Dumber follow-ups, it’s not out of the question—but why the demand exists in the first place and what it says about our cultural era. How did a little-loved Bette Midler vehicle become a bona fide phenomenon? A so-so box office performer in 1993, where it finished 39th at the yearly box office (on par with Disney’s Planes and Elysium), the film has been growing in popularity with each passing year; last Halloween, it was the 15th most-searched for movie on the Internet, and the fifth most popular in the horror and Halloween genres.

But, of course, Hocus Pocus isn’t really a horror film, which is one of the reasons that it’s become a persistent cult classic of the Internet age. Originally conceived as a Disney Channel original movie, studio executives thought its seeming blend of family-friendly humor (which was actually really risque) and seasonally appropriate mayhem would play well to audiences; why Hocus Pocus was then released in July was anyone’s guess. Hocus Pocus opened against Free Willy (which grossed twice as much money, due to its more conventional premise), and three months later, Tim Burton’s Nightmare Before Christmas further stole the film’s spotlight by actually being released on Halloween.

Critics were even less kind than Disney’s release strategy. Roger Ebert slapped the film with a one-star rating, quipping that “watching the movie is like attending a party you weren’t invited to, and where you don’t know anybody, and they’re all in on a joke but won’t explain it to you.” The New York Times’ Janet Maslin particularly singled out Bette Midler for scorn, saying that Midler “grandly plays this harpy as if she were Norma Desmond tackling the opening of Macbeth.” In addition, Maslin felt that Hocus Pocus had “virtually no handle on its story,” describing the result as “an unholy mess.”

However, the filmmakers’ initial inclinations proved correct: In the mid ’90s, Hocus Pocus became a staple of the Disney channel lineup, replayed ad nauseam in the same way that Road House always seems to be airing somewhere on cable. As in the case of The Shawshank Redemption, which earned its spot atop the IMDb Top 100 list not because of quality but TV ubiquity, familiarity bred a certain level of intimacy. Whereas repeat viewings on DVD allowed viewers to parse over the mysteries of Donnie Darko or Memento, Hocus Pocus became associated with an entire era of television programming. If you say Hocus Pocus was your entire childhood, you might not be exaggerating.

But the difference between Hocus Pocus and Brink! or Johnny Tsunami, two of the Disney Channel’s more popular original movies, is that Johnny Tsunami loses its appeal when you’re no longer 9 and partially brain-dead (after all, this is an age where the Power Rangers passed for quality entertainment). Hocus Pocus, however, plays better the older you get, when you understand more of the in-jokes, like the constant references to the hero’s virginity. It’s designed less for children than former children to look back at what they watched as kids and wonder how their parents ever allowed it. (See also: Clueless.)

In his delineation of what makes cult classics tick, the A.V. Club’s Scott Tobias argues that DVD rewatchability is important, as “cult movies are often remembered more for scenes and sequences than they are as complete works.” Here, Tobias is describing the flawed but spellbinding Roger Avary adaptation of the Bret Easton Ellis novel Rules of Attraction; however, he may as well have been speaking of Hocus Pocus—which is, to put it lightly, a hot mess. The script barely adheres to its own logic (like, how can a 300-year-old witch who doesn’t know what a bus or a road is crack a joke about driver’s permits?). The A story, in which Omri Katz attempts to put his P in Vanessa Shaw’s V, is even more of an epic eye roll.

Where DVD allows Rules of Attraction lovers to skip over the unnecessary drug-dealing subplot, the Internet age would give Hocus Pocus fans an even sharper tool: the GIF. Like any Ryan Murphy show, Hocus Pocus is best enjoyed as a compendium of Big Moments, of which the film has no short supply; the casts camps it up like they’re doing drag for the hearing and visually impaired. Bette Midler, Kathy Najimy, and Sarah Jessica Parker’s performances exist at 11, and director Kenny Ortega (later of High School Musical) continually keeps the tempo at a Three Stooges pace. If it doesn’t always work as a whole, its madcap spirit begs to be GIFed.

BuzzFeed lists have further made the GIF into an essential part of the Hocus Pocus experience, arguably as important as actually watching the movie. The Tina Fey connection here is important, as the memeification of Mean Girls gave Fey’s script a second life outside of the film itself; you don’t have to have seen the movie to know what lines like “Is butter a carb?” and “She doesn’t even go here!” mean. Slate’s J. Bryan Lowder says that Hocus Pocus has, in particular, become an embedded part of the gay vernacular. Lowder writes, “Rare (and unfortunate!) is the gay man who can’t toss off a quote like ‘I’ll have your guts for garters, girl!’ or call to his ‘sis-taaaas!’ in Bette Midler’s distinctive, glass-cracking register.”

Given that the three sisters are dressed like contestants in a Halloween episode of RuPaul’s Drag Race, the film’s gay following is unsurprising. (Proof: Everything about this photo.) Midler appears to have modeled her character, Winifred Sanderson, after Ursula from The Little Mermaid, who was herself inspired by Divine, John Waters’ favored diva. And despite Maslin’s take, the A.V. Club’s Sonia Saraiya thinks she’s exactly why Hocus Pocus works, a microcosm of the movie around her.” Like Star Wars and Sleeping Beauty before it, Hocus Pocus’s heroes are an afterthought. Evil might not pay, but as Saraiya explains, it looks like a lot more fun.

“In spite of her acting-legend status, there is nothing especially noteworthy in Midler’s performance… But the sheer abandon with which she hams it up, playing off of Najimy and Parker, makes her the heart and soul of a film that could otherwise be forgettable. She takes the silliness of it all quite seriously… There’s a kind of studied effort that has to go into creating something this memorably campy. In Hocus Pocus, the witches make friends with a couple they believe to be the devil and his wife—played by director-siblings Garry and Penny Marshall. Their obsequious obsession with ‘the Master’ is a broad wink to the audience in a film full of them.”

Hocus Pocus’ commitment to its trio of villains acted as a harbinger for our modernist era of fantasy and comic book storytelling, which increasingly focuses on the bad guys. Christopher Nolan’s Batman movies made Bruce Wayne into an neoconservative anti-hero, whereas Gotham dispenses with him altogether. Maleficent finally let Sleeping Beauty’s villainous diva be the main attraction, but Linda Woolverton’s screenplay clips her wings in the second half by making her grow a conscience. Yawn. Part of the thrill of Hocus Pocus is that the witches don’t learn—and we’d prefer that they didn’t. As Saraiya notes, “We like villains, even if we want to see them burn.”

In a post for Badass Digest, Meredith Borders agrees that it’s this “gleeful sense of disobedience” that’s made Hocus Pocus an Internet sleeper hit, but there’s one final factor that will ensure the film’s longevity: scarcity. Outside of the Burton and Laika productions, there are few Halloween movies that can play to a broad family audience in the way that Hocus Pocus does; it’s clever enough for adults without being so scary that it alienates kids. A great deal of Hocus Pocus’ fanbase was in preschool when the film initially debuted in theatres, and since then, Hollywood’s Halloween fare increasingly plays to the horror crowd. You can’t exactly take Punky Brewster to The Conjuring.

Considering the lack of heirs to Hocus Pocus, it’s understandable that the Internet is hungry to relive a time when fare like the Goosebumps series made zombies and sassy witches accessible to all ages; however, in a recent post for the Daily Dot, Dominick Mayer notes that bringing our favorite properties back to life is a double-edged sword. Discussing the recently announced Toy Story 4, Mayer writes, “With its perfectly cyclical final shot, which returns to the idyllic clouds on which the trilogy started, Toy Story 3 was a perfect end to the series. To go further isn’t to search for infinity and beyond in the way it was first promised. It’s to offer a reminder that Pixar is as much beholden to commodity as most every other modern film studio.”

But there’s a big difference between these two instances: Toy Story 4 is manipulating the Internet’s desire for nostalgia to bankroll a studio’s existential crisis. The idea of a Hocus Pocus sequel, however, feels a bit more like the recent return of The Comeback, a criminally mistreated cult show finally getting its moment in the spotlight. If Hocus Pocus had bad timing, it’s got nothing on Valerie Cherish; The Comeback, a dry satire of reality TV narcissism, got yanked less than a year before Bravo made the Real Housewives into a cultural phenomenon. Predicting the future is useless if nobody’s watching.

Hocus Pocus didn’t predict the future. It became the future, or at least part of it; the film helped define an integral facet of how we understand culture in the Internet age, the ways in which we remix the past to improve upon it. If there’s anything to be said for a Hocus Pocus sequel, it’s that there’s no perfection to ruin. The beauty of Hocus Pocus is its flaws, a movie composed of entirely of excess, whose best features are its wrinkles and warts. Nostalgia can’t rewrite the past, but it can help a 300-year-old witch settle some unfinished business. If the spotlight never really left Winifred Sanderson, it’s time to finally give her the marvelous introduction she deserves.