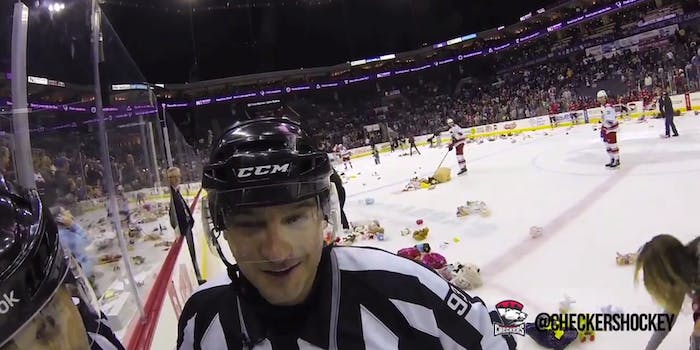 It’s a first-hand look inside one of professional sports’ most thankless jobs.

American Hockey League referee David Banfield donned a GoPro helmet camera during a Dec. 7 game between the Charlotte Checkers and Rockford IceHogs. Helmet cams have been used in games before, but with all of the referees also donning microphones, it’s the first time we’ve been able to hear everything on the ice.

We’re given a taste of what Banfield regularly deals with as he witnesses every goal, the sport’s traditional Teddy Bear Toss, and the many fights and tussles the players get into throughout the game.

It’s a first-hand look at one of professional sports’ most thankless jobs, and it even gives a glimpse into the referee dynamic. There’s enough cursing in the audio to get the FCC in a panic, but that could probably be muted if helmet cams catch on enough to be used in a televised sports game.

With endless criticism about the refs getting the call wrong, one more perspective couldn’t hurt. And if this is where the future of sports is going, I’m all in.