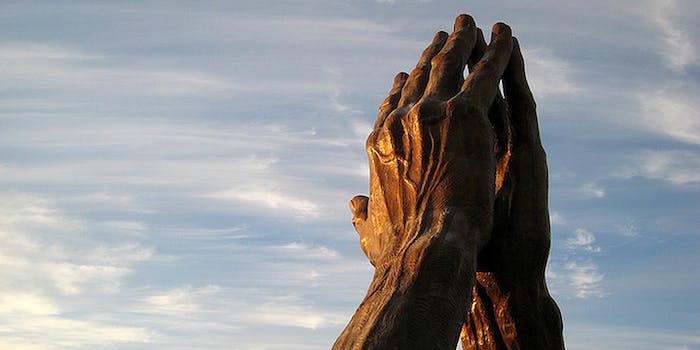 We could use a hand here.

The difference between celebratory slappage and pious reflection doesn’t quite come across in the abstracted world of emoji: a schism has long divided fans of an icon that may depict either. 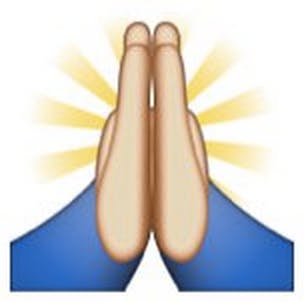 It all started with a light-hearted news segment from Philadelphia station 6ABC News.

So, are we looking at hands pressed together in prayer, giving off a holy radiance? Or is it a high five powerful enough to send shockwaves of friendship into the local atmosphere? We’ll probably never know, sorry—which means we’re sure to have this argument again next year.

I know this is random. Dm me an emoji if you’re struggling with something in your life so I can pray for you. Thanks 😊❤️🙏

Most people don’t realize that, this “🙏” isn’t a prayer emoji. It’s just a high five.

sorry, but those will always be the praying hands emoji & not high-fiving hands…

It’s a praying hands emoji y’all. You don’t high five someone else with your thumbs facing the same way. Or maybe you do, then you’re weird.

This is a high five emoji 🙏 not a praying one people

Dear Emoji maker, if it’s a high five emoji & not praying hands, make the sleeve of one of the hands different from the other. Just sayin

all these years I thought this emoji 🙏 was someone praying …..BUT ITS A HIGH FIVE?!?!?! I’ve been living a lie

We reached out to a few of these users in hopes of better understanding how they fell on the side they did and why the issue was important to them. This argument was fairly persuasive:

@MilesKlee Hey! iPhone verifies what each emoji means with the ‘SPEAK’ assist option. Highlight the emoji, and select ‘SPEAK.’ @dailydot

@MilesKlee The SPEAK option looks like this. When you select the praying hands emoji, iPhone says “Hands In Prayer.” pic.twitter.com/HOou5eiWGi

Meanwhile, the Emojipedia proved absolutely useless in resolving the issue: although “Person With Folded Hands” is “commonly used to represent praying hands in western countries” and “sorry” or “thank” you in Japanese culture, it’s also used to convey pleading, or—that’s right!—a high five. Because really, who is the Internet to tell you otherwise.

@ajs @kevinroose @jamesliamcook 🙏It is a person holding their hands together. Meaning of this differs culturally, which makes emoji fun 🎉

Maybe we should compromise and call it a high five with God.