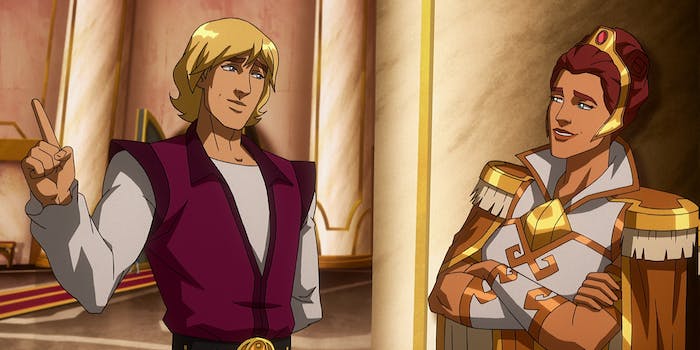 Masters of the Universe: Revelation/Netflix

Netflix‘s Masters of the Universe: Revelation debuted last week to positive reviews, scoring an impressive 94% on Rotten Tomatoes and 70% on the more nuanced aggregator Metacritic. Echoing the style of the 1980s cartoon, it offers more sophisticated storytelling and characterization than before. However, the audience response to Masters of the Universe: Revelation is more conflicted than the critical reviews. Some fans are downright angry. (Warning: This post includes spoilers for the first five episodes.)

Rebooted by filmmaker Kevin Smith, the new Masters of the Universe was marketed both toward kids and adult fans of the old show. But while the critical reception was positive, the audience scores on Metacritic and Rotten Romatoes tell a different story. Disgruntled fans have review-bombed both sites with negative comments, complaining that the show focuses too much on female characters. Smith cheerfully responded by sharing positive reviews on Twitter, replying to complaints like this person who worried about He-Man being “subjugated” by “some pandering agenda”:

While the original Masters of the Universe starred He-Man as the lead of an ensemble cast, the Netflix reboot focuses more on Teela (Sarah Michelle Gellar). He-Man and Skeletor seemingly get killed off in episode 1, and while He-Man continues to have a role, Teela is the protagonist of the first half-season. This angered some fans who expected He-Man to take the lead, an expectation that was encouraged by the way Kevin Smith promoted the show.

For over a year, fans have speculated that the new show might sideline He-Man. Smith pushed back against this rumor, tweeting in May 2020 that “our series is LITERALLY all about He-Man.” He also called out the fandom YouTube channel Clownfish TV, which claimed to have an inside scoop on the reboot. But when the show arrived last week, He-Man did indeed play a secondary role to Teela. “Kevin Smith lied” is now a popular refrain among the show’s haters, with some fans demanding that Smith apologize to Clownfish TV.

On the one hand, the show’s marketing was a little misleading. Masters of the Universe: Revelation was sold as a more traditional reboot than Netflix’s She-Ra, which drastically overhauled the franchise’s tone and aesthetic. In that sense, it’s surprising to see Teela (previously a secondary character) get more screentime than He-Man. On the other hand, much of this backlash is clearly motivated by sexism. People are specifically mad about the presence of a female lead, with many commenters saying the show is too “woke.” The Metacritic audience reviews are full of complaints like “Change the name to SHE-MAN” and “Teela is motivated by PMS.” They think He-Man has been emasculated.

Speaking to Variety, Kevin Smith pointed out that “there are girls in every episode” of the original Masters of the Universe cartoon, which also included storylines where He-Man wasn’t the central character. Plus, fans have only seen the first five episodes of the new show, and it’s pretty clear that a) He-Man isn’t really dead, and b) he and Skeletor will have a bigger role in the next chunk of episodes. Poking fun at the idea of He-Man being sidelined, Smith said, “You really fucking think Mattel Television, who hired me and paid me money, wants to do a fucking ‘Masters of the Universe’ show without He-Man? Grow the fuck up, man.”

This He-Man backlash unintentionally proves how hard it is to please this kind of conservative, nostalgic fanbase. The most vocal Masters of the Universe fans seemingly want a carbon copy of the original. But that’s never going to happen, because a modern reboot will inevitably be more complex and forward-thinking than a corny 1980s cartoon.

Ironically, Masters of the Universe: Revelation already is a pretty old-school example of a modern reboot. While Netflix’s She-Ra went in bold new directions, Revelation follows a similar style to the 1980s original, with the writers digging deep into Masters of the Universe lore. Netflix even hired the quintessential fanboy, Kevin Smith, to run the show. The one major departure was the choice to explore Teela while temporarily putting He-Man on the back-burner—something that’s only controversial in the context of wider culture wars about female characters in sci-fi/fantasy entertainment.