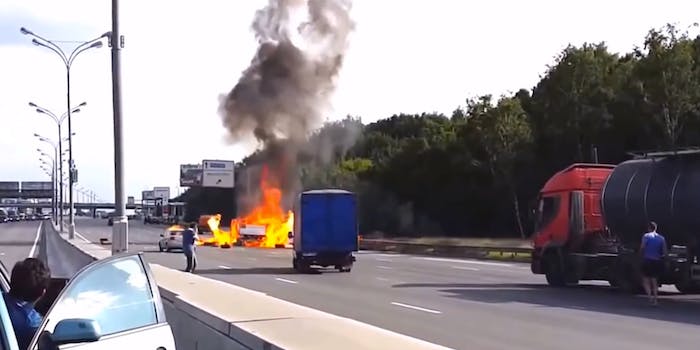 This is why you always strap down your HAZMAT tanks

You certainly won't be on your way to the promised land.

The first rule of HAZMAT school is to not drive like a bat out of hell.

Russian dash cam videos are notorious for showing the best and worst of Russian driving from unbelievable duels to even meteor explosions. The cams are totally entertaining, sure, but they also serves as insurance against insurance scams, aggressive drivers, and corruption.

But one video in particular is a perfect beginner warning for any HAZMAT drivers out there.

YouTuber Jay Patterson, apparently something of a HAZMAT safety guru, says he uses this video as an “icebreaker” for HAZMAT safety classes. For added measure, he set the video to “Highway to Hell,” which could be taken literally in this case. If you’re hauling gallons of explosive material, however, you probably shouldn’t need this video to demonstrate how important it is to drive carefully.

You certainly won’t be on your way to the promised land.