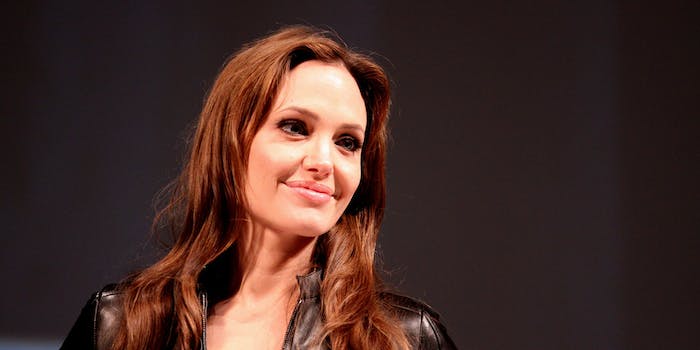 Being brave is all over the Internet this week. But what does it really mean?

I’d always thought BRCA was pronounced by its initials. I wouldn’t care except that for the past week I have had this Bugs Bunny bit stuck in my head. Bricka bracka sis boom bah! Sorry, Bugs. Angelina is still better than you. And everyone else. Angelina wins the Internet this week.

Because Mother’s Day came a week late, don’t you think? Oh, Angie. It’s not about your fated and feted breasts. It’s about the chilluns. Being there for the kids. Honoring mom. Let’s cheer that! Incessantly. If I hear one more burbly morning TV show host or guest smarming, “Let’s not forget Angelina’s most important role: Mommy!” I’m going to throw up all over my house. Family isn’t just kids, you know. But that’s a topic for another day.

Look, cancer is serious shit. I can’t begin to imagine what it’s like—I hope I never to need to—and don’t mean to diminish her or anyone’s health risks.

Her decision: Proactive, sure. Inspiring, perhaps.  But brave, really? I think that’s a term that’s overused.

In my day job, I talk to lots of people who have successfully weathered all kinds of health issues. Health issues that have actually occurred. And like most of us, I know many people who have their own. For example, my friend Gina—who was diagnosed with breast cancer at 36 didn’t get genetic testing beforehand; why should she have? Cancer didn’t run in her family. But she was treated, adopted a child, went on to have two more of her own, wrote a book about it, and is doing awesome. We called her “the cancer slayer.” Someone like that: that’s brave. People do lots of brave things, everywhere, every day.

This article shares my view that Angie’s decision wasn’t so much brave—just one option. Also, preventative surgery isn’t always the answer. That’s a message I wish had been more emphasized.

But everyone has to make their own health decisions. I don’t begrudge her or hers, but I fear the stampede by the People-reading-sheeple at the geneticist’s office and in the OR. Oh well. Maybe they’ll finally figure out the crossword in the waiting room.

Sigh. Is there anything else on the Internet lately?

Well, there’s even more news about being brave!

In keeping with the Hollywood theme, not only are your breasts major news for a week, but so is your makeover.

The last Disney movie I saw was The Little Mermaid. When it first came out. In 1989. Over the past 24 years I could give two shits about how princesses—animated and not—are portrayed.

But the Internet was all about “brave” in more than one way this week—including Disney’s coronation and subsequent Swan-izing of Princess Merida, from the movie Brave. Being a child-free selfish bitch, I wasn’t familiar with the film, but in the “before,” she looked kinda like me after a good run.

Brave is sexy, cat-eyed. Brave requires a new wardrobe. The made-over Princess Merida appeared to have a stick up her ass. Or at least a pre-awards show colonic and a fistful of Xanax.

Although! On Wednesday, Disney got the online petition memo and quietly changed her back—appeasing the moms who know how to use the Internet and those of us more klutzy with the flat iron.

Because there’s nothing braver than going back to the “before” picture, right?