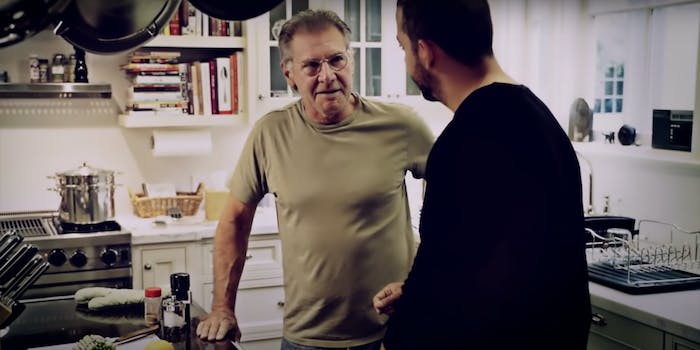 ‘Get the f**k out of my house’: Resurfaced clip of Harrison Ford witnessing a magic trick is entirely relatable

He can hardly believe it.

Some things, like a good bit of magic, the amazement of seeing a trick performed before your eyes, and a curmudgeonly Harrison Ford, are eternal. And this resurfaced clip of Ford witnessing a magic trick from David Blaine has them all.

The clip is from the 2013 ABC special David Blaine: Real or Magic and has been viewed more than 5.4 million times since it was first uploaded to YouTube in January 2014. It features Blaine performing a card trick in Ford’s home.

The basic gist of the trick is that Ford picked a card from a deck and placed it back into the deck. Blaine said that the card is no longer in the deck and told Ford to pick up a piece of fruit. After Ford revealed the card he chose—the nine of hearts—Blaine cut open an orange to reveal that Ford’s card is in the orange. And even before Ford looked at the card, which is indeed the nine of hearts, he could hardly believe what he was seeing.

“Get the fuck out of my house,” Ford said as he holds his card in his hands.

Over the past week, the slightly edited version of the video ended up on TikTok, which is captioned with Ford telling Blaine to get out of his house.

But the TikTok version on Twitter featured both a succinct summation of what happened and enough of a tease that made the video an instant-click: “Please enjoy Harrison Ford watching a magic trick & then reacting in the only way Harrison Ford reacts to anything.”

Some people wanted to know how Blaine pulled off the trick—and there’s a video that potentially explains it—but it’s also fun to imagine the bigger possibilities of witchcraft or a deal with the devil.

You also had people relate to Ford’s reaction to the trick—and even Blaine’s presence in his house.

And if nothing else, there’s still something cool about seeing a magic trick at work.

Ford is a rich celebrity whose brand is being kind of a grump but in a fun way. But for a brief moment, as he’s seeing something he can’t believe, he’s just like the rest of us.