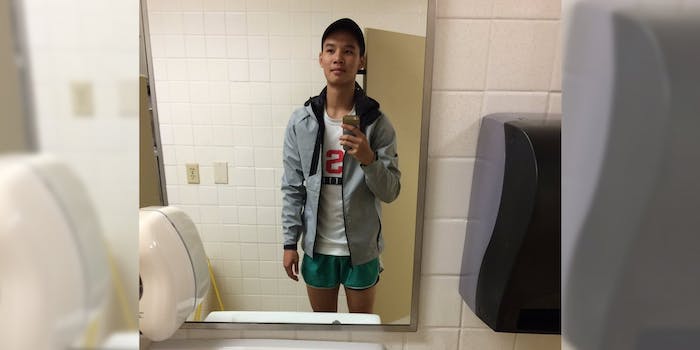 You’re in the library, studying for an exam. With minutes to go before the test, you realize you’re wearing shorts—without long pants, you won’t be allowed into the lab, and all your preparation will be for night.

What do you do?

If you’re lucky, you’ve got a friend like Andrew Nguyen, who gave the very pants off his butt to help a friend in need.

My friend needed sweatpants in order to go in her lab and take a quiz so I'm just chilling in the restroom for 50 mins with booty shorts on pic.twitter.com/cbWCeYa5wF

Andrew, a student at the University of Texas at Arlington, was studying with Diana Le when she started freaking out because she didn’t have proper lab attire. Like a true friend, he stepped up and traded his sweats for her booty shorts, then hung out in the bathroom until her exam was over.

With nearly an hour to kill, he took a selfie in the too-tiny shorts. It’s now insanely viral, with hundreds of thousands of retweets and coverage on BuzzFeed and elsewhere.

Nguyen knew the pic would be funny, but he didn’t realize it would explode the way it has.