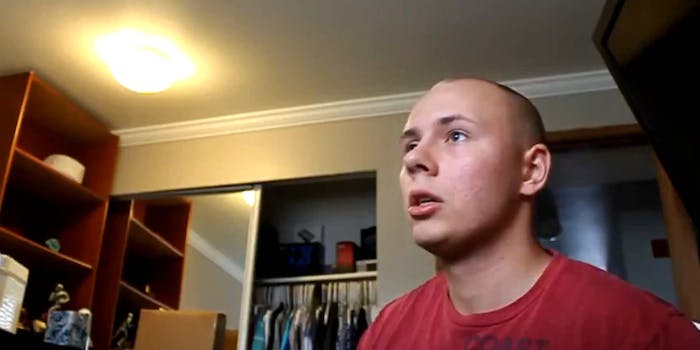 Gun instruction video gets just about everything spectacularly wrong

Wait for the surprise ending.

It’s the Fourth of July, and nothing says “U.S. patriotism” like a dumb white guy holding a gun.

“I’m being stupid today,” says the proud new owner of a replica Ithaca M-37 shotgun in a “gun instruction” video posted to LiveLeak.com two days ago.

He doesn’t know the half of it.

As the video unfolds, the video maker explains that the Ithaca M-37 is based on a Remington model shotgun that was used in World War II trench warfare. Although he doesn’t know what trench warfare is—or that it was nearly obsolete by World War II—he explains that the gun allows you to “shoot the bad guys and they’ll die.” He adds helpfully, “Or Japs, or Nazis—whoever the Americans were shooting, whatever.”

Unfortunately, this video has about as much to teach us about proper gun safety procedures as it does about history. As it continues, the speaker casually loads the shotgun with 12-gauge ammo, telling us how handy it is that the gun contains a mechanism that allows it to be “uncocked.”

You can guess where this is heading, right?

Happy Independence Day, America! Here’s hoping your Fourth of July goes out with as big a bang as this guy’s bedroom ceiling did.