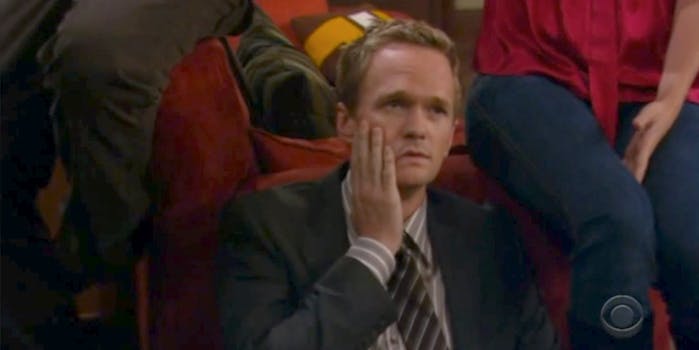 It's even funnier in real life than it is on How I Met Your Mother.

One groom decided to cash in on a slap bet on what might be the biggest day of his life.

The slap bet, for those who don’t watch How I Met Your Mother, allows the winner of a bet between two people to give a free smack to the loser at the time of his or her choosing, so long as rings aren’t involved.

It stems from the show’s second season, when Barney Stinson chose to be slapped five times for all of eternity by Marshall Eriksen after preemptively hitting him. With the countdown in place, it’s only a matter of time before Marshall cashes in again, and that looming fear of uncertainty has been one HIMYM‘s longest-running gags.

Steve Dalton lost his own slap bet, and his buddy Zane, the winner, used his own wedding (already with a built-in audience) to hand out the ultimate punishment in style.

Seeing as Dalton posted the year-old video to Reddit himself, there seem to be no hard feelings between the two friends.

With two slaps remaining, here’s hoping that Barney gets what’s coming to him at the altar.