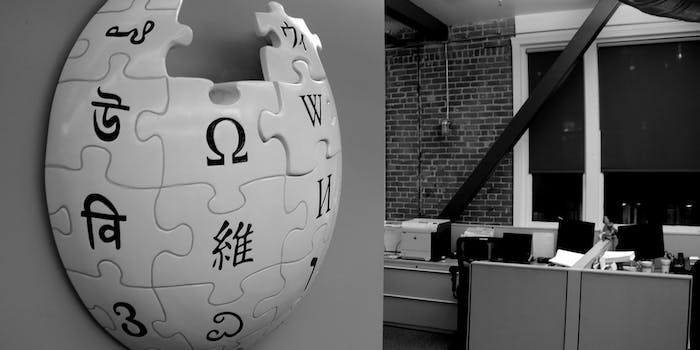 Wikimedia Foundation comes to the aid of an editor accused of libel.

The Wikimedia Foundation has come to the defense of a Greek Wikipedia editor being sued for libel by a local politician. By pursuing the case in court without fully understanding the online encyclopedia’s unique culture, the politician may be doing even more harm to his own reputation.

The suit began last year when Theodore Katsanevas, a Greek politician and son-in-law of the country’s former prime minister, brought libel and defamation charges against Dimitris Liourdis, a 23-year-old lawyer in training from Athens. Liourdis is an active editor on Greek Wikipedia under the name Diu.

At the center of the case are revisions Liourdis made to a biographical entry about Katsanevas. Liourdis updated the article to include that it had been widely reported in 1996 that Katsanevas was called a “family disgrace” in the last will and testament of his father-in-law, former socialist Prime Minister Andreas Papandreou, who died that year. In his will, Papandreou also reportedly accused his son-in-law of trying to exploit his name for political gain.

In adding this information to Wikipedia, Liourdis was in line with the online encyclopedia’s policies, citing reliable secondary sources and exhibiting a neutral point of view. At the time the will was disclosed it was widely reported by numerous reputable new outlets, including the San Francisco Chronicle and the Baltimore Sun. The story was noteworthy for Papandreou’s decision to give all his money to his second wife, leaving nothing to his four children.

In a statement posted last week, the Wikimedia Foundation, a nonprofit organization based out of San Francisco that works to advance the global mission of Wikipedia, pledged its support for Liourdis.

The Wikimedia Foundation is deeply disappointed by the unwarranted actions taken by Mr. Katsanevas in this matter. Wikipedia is an open and collaborative project that is committed to uncensored information presented in a neutral point of view and supported by reliable, secondary sources. Diu acted within the scope of these principles and policies – the statements were and still are supported by reputable secondary sources—and the Greek Wikipedia community decided, through discussion, that they were appropriate for the article.

The Wikimedia Foundation will help pay for Liourdis’s defense costs with its Legal Fees Assistance Fund. The organization argues that by going after Liourdis, Katsanevas fails to understand how Wikipedia operates. As the editor responsible for adding the content, Liourdis is assumed by Katsanevas to be responsible for its presence on the site. He demanded that Liourdis remove the offending content or face a lawsuit, not realizing that no one editor on Wikipedia can permanently eliminate content.

The situation escalated last week when a Greek Judge, also failing to understand how Wikipedia operates, issued a pre-preliminary injunction ordering Liourdis to remove the offending section. Liourdis complied, but other editors reposted the content to Katsanevas’s Wikipedia biography almost immediately. A hearing to issue a preliminary injunction is set for next month. The case itself is set to go to trial in 2016.

According to Arstechnica, Katsanevas’s confusion over how Wikipedia works has also led him to file a defamation suit against the Greek Free/Open Source Software Society, a nonprofit group he mistakenly believes is in charge of Wikipedia.

It’s unclear how the lawsuit will conclude. In certain cases, defamation in Greece is punishable by imprisonment. Journalists can invoke good faith or public interest in their own defense, but it’s unknown if a Wikipedia editor can successfully argue the same.

What is clear though is that Katsanevas’s own dogged prosecution of Liourdis seems to be backfiring. Rather than quashing the controversy, he’s only brought more attention to it. In response to his lawsuit, members of the Greek Wikipedia community have worked to bring the story to the attention of journalists. They’ve also placed banner ads in support of Liourdis throughout the Greek version of the online encyclopedia.

The controversy has also propagated several new articles on other editions of Wikipedia, furthering the will controversy that Katsanevas hoped to keep hidden in the first place.

“Now, we have the same article (with the reference to the will and the lawsuit against me) in English, Catalan, Polish, Yakut, French, and Italian,” Liourdis told ArsTechnica.

He said the case reminds him of the Barbara Streisand effect, in which an effort to keep information from the public only brings more publicity.