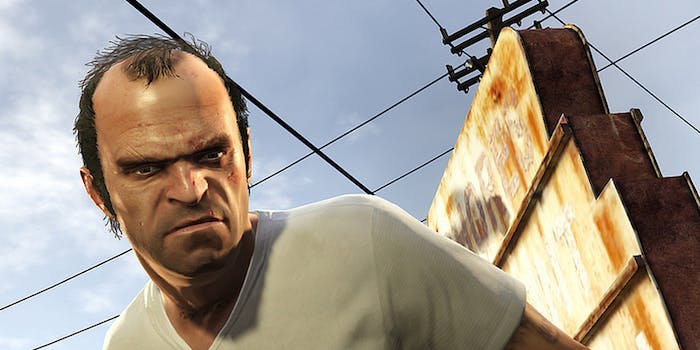 Steven Ogg—GTA V's Trevor Phillips—told a fan to go f*ck himself. And the fan couldn't be happier.

If you believe the conventional Disney wisdom, a dream is a wish your heart makes. Have faith in your dreams, and someday the dream that you wish could come true.

Diego, a Grand Theft Auto V super-fan, took those words to heart when he attended NYC Comic-Con last weekend. During the GTA V panel last Saturday, Diego took the opportunity to fulfill his dream of having Steven Ogg, the actor who plays the sociopathic Trevor Phillips, tell him to go fuck himself.

During the Q&A section, Diego stood up and asked whether any of the actors in attendance—Ogg, Ned Luke (Michael), and Shawn “Solo” Fonteno (Franklin)—would continue to star in video games in the future. He then followed up by shyly requesting that Ogg curse at him, “like, say, ‘Diego, go fuck yourself,’ or something.”

What follows — Ogg jumping off stage, charging at Diego like a bull that’s been threatened with castration, and bellowing “Go fuck yourself!” centimeters away from his cell phone camera — is nothing short of inspirational, for both GTA V fans and anyone who’s ever dreamed of having a celebrity spew vulgarities at them in real life. The YouTube video has more than 500,000 views, with one commenter remarking that Diego can now “die happy :D.”

So if you’ve ever wanted to hear Joe Pesci threaten to stab you in the face, or Clint Eastwood ask you if you feel lucky, have faith! The dream that you wish could come true.