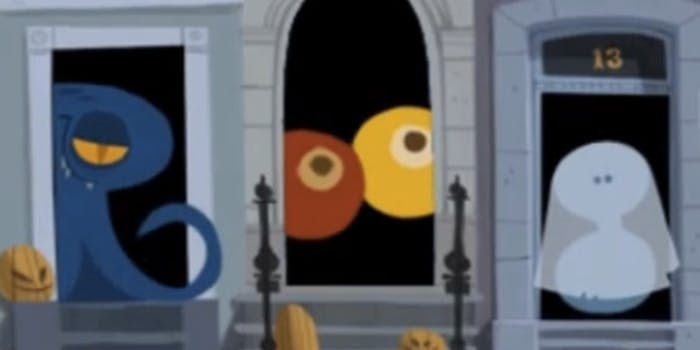 First, there’s the interactive logo, which features the spookified Google letters behind the doors of presumably haunted row houses.

Here’s the entire animation, recorded in a video by blogger Simon Rüger:

But this is Google we’re talking about, so if you quit there, you’re missing out on an interesting, search-activated Easter Egg.

Type the name and year of a horror film—for example, Paranormal Activity 2009 or Silent Hill 2006,—to see black bats appear on your search screen. Hover over the IMDB information to watch them scatter.

Through careful trial and error, (OK, we just like watching the bats fly around), the Daily Dot discovered that Google missed a few scary movie classics. The Easter Egg isn’t activated for 1996’s Scream, for example.

Google has a history of going all out on their animations for Halloween. In 2011, in lieu of the usual holiday illustration, the staff put together a live-action stop-motion animation featuring the Google team carving 1,000-pound pumpkins at their headquarters in Mountain View, Calif.