“Make Out Point” is a mainstay of suburban towns and campy horror movies: the

growing up and/or get murdered.

If you’re unfamiliar with the concept, here’s a sample conversation for context, from

the opening act of a ’90s anti-drug PSA I just made up:

ANDY:  Nah man. I went up to Make Out Point with Becky. I almost got to second base.

On a late Thursday night, compelled by the fiery curiosity that defines a good

journalist, I asked Google Maps to find me “Make Out Point.” And it came up with the

WHAT THE FUCK GOOGLE MAPS WHY DID THIS HAPPEN pic.twitter.com/gtoeA443Kq

That’s creepy, Google. No one is turned on by lecherous grinning humanoid rats and

rubbery pizza. Chuck E. Cheese’s is a place for divorced dads trying their best and

to lie about the next day in homeroom. Plus, come on, there are kids there.

“Make Out Point” map suggestions change based on location, but looks like none of

Google’s other options are much better. 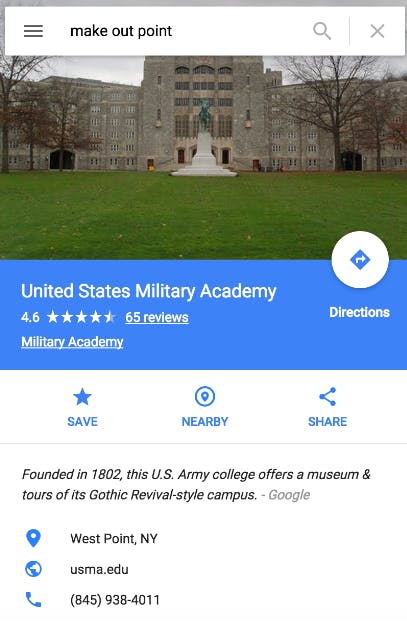 So it turns out, to no one’s surprise, Google is a total dork. It has no idea where to

If Google were a high schooler, it would be a kid that 1955 Crispin Glover in Back to the Future beat up on the regular. Google was the one who reminded the teacher

about homework right before the bell rang. I heard Google was sitting behind

Amanda F. in Calc and he leaned in and smelled her hair. Like, who even does that?

Here’s the lesson: If you want to find Make Out Point in your town, ask the cool kid

in his dad’s mechanic shirt smoking outside the 7-Eleven. You know, the one who

doesn’t play by the rules. And don’t listen to Google Maps unless you’re comfortable with

ending up on a sex offender registry.

Photo via Jon Rawlinson/Flickr (CC BY 2.0)