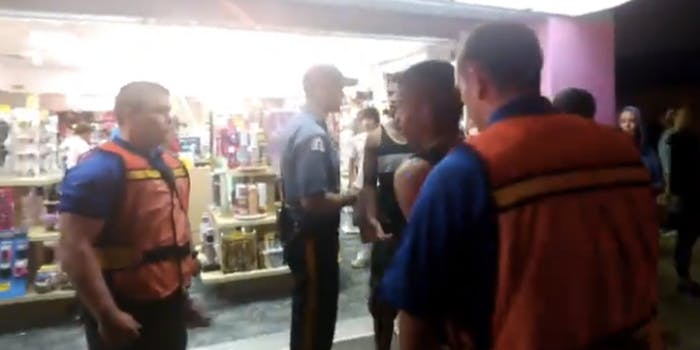 This is the first arrest ever filmed on Google Glass

If he had used a smartphone, this guy may have been punched in the face.

The somewhat covert Google Glass has been used to film its first arrest. A fight broke out on a New Jersey boardwalk and a guy in Google’s ridiculous-looking wearable computer was there to capture it all with just his eyeballs.

Barrett told VentureBeat that no one looked twice at his Google Glasses or even suspected he was filming the arrest.

Google Glass is a wearable device that, especially at night and in a crowd, might just look like a pair of fashion eyeglasses means that video capture — surveillance, if you will — is easier than ever.

Barrett said he thought the young man in the video might have punched him had he known Barrett was filming, and if Barrett had used a more conspicuous cell phone to capture the fight.

Aside from the creepiness of surveillance with Google Glass, this video also has wide implications for citizen journalism. If subjects don’t know you’re filming, you may be able to capture a whole lot more.