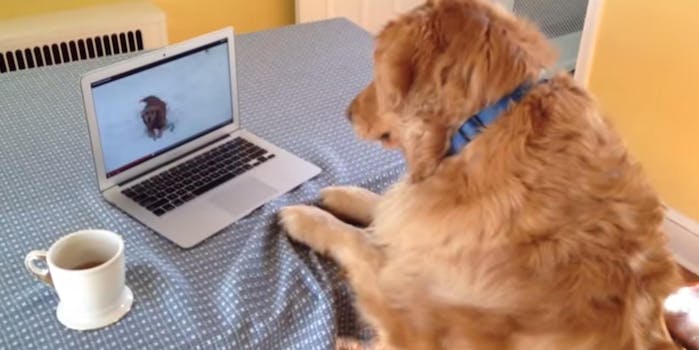 For a dog, it's cruel and unusual punishment.

If you thought you had a bad case of FOMO (the “fear of missing out”—it’s a medical term), wait until you see how this dog reacts to a play session it can’t join.

Annie Britton knew just what to do when she found a video of a golden retriever playing with a squeaky toy in the snow. No, she didn’t replicate the scene with her own golden, an adorable pup named Josie. Instead, she cruelly but hilariously showed the video to Josie, who promptly edged closer to the screen to watch.

The golden in the video is evidently “confused by [a] squeaky toy,” according to Britton’s description. Josie, meanwhile, is confused by the video itself. She literally tries to reach through the screen for the dog and its toy, as if to say, “I can teach you, young one, about the magical object before you, if you would only let me join you.”

It’s a reminder that, while dogs are humans’ best friend, humans will sell out their best friend for YouTube hits in an instant.