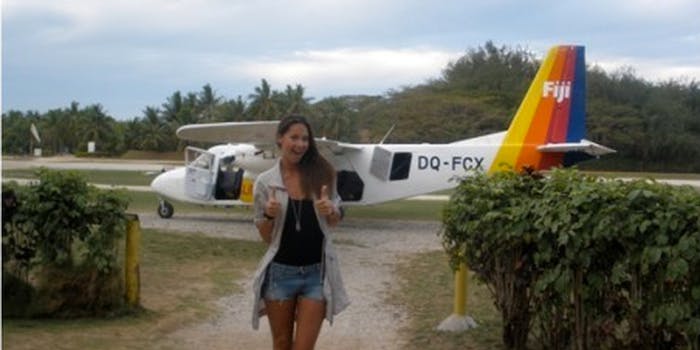 Behind GoGoFantasy, a Kickstarter alternative for your kinkiest desires

Meet Michelle Love, a pretty, downtown waitress in Austin, Tex., with an insatiable sex drive that knows no limits or bounds.

A self-proclaimed nympho who attends “wild parties where you can find people doing just about anything” every month, Love keeps an itemized bucket list of exotic locales wherein she’d like to have sex with her boyfriend. It’s a long list, she told the Daily Dot, one packed more than a few spots that would make most raise an eyebrow.

At the top of her list is “Mile High Club.” Michelle Love wants to have sex in a plane.

Love, who wouldn’t give her real name, wouldn’t be the first, of course. The Mile High Club is one of the most well-known and beloved underground fraternities that exist in the world of aerial recreation. But she’s most certainly on the short list of those who want it the most.

What’s more, she wants to do it right. None of this crunched-up-in-a-commercial-plane’s-bathroom-stall funny stuff, she said. Love wants to stretch out, and she’s got just the plane to for the task: a tiny prop plane piloted by a regular patron of her bar, a man who’s wont to taking couples into the sky so they can do the dirty.

There’s plenty more. The fetish world is a cumbersome one wrought with intricacies, weird chain collars, and even weirder body positions. Since going live in January 2012, the site has earned a reputation for crowdfunding all the leather-bound projects deemed too extreme for the Kickstarter crowd.

Love took to the site in April, creating a page called “Mile High Club” and setting the funding price at $1,500, money that would go towards renting the plane, two cameras (she’s offering footage of her exploits to backers that gave between $50 and $100), and “a few other things.”

Anybody who’s pledged above the $1,500 mark is simply going to get a writeup report on what went down in that airplane. And as Love will readily admit, she’s not even a good writer.

“I love it,” she says of her decision to crowdfund her trip.

“It gets me wet thinking about it.”

“We’re trying to create a community where likeminded people can interact,” Willbacjh said.

“The focus is the adult world, whether it’s developing a pornography film that other people are interested in or creating a personal fantasy or fetish that somebody wants to fulfill but haven’t been able to.It’s about personal gratification and personal sexuality, and we’re trying to bring that to the forefront.”

So far, the site’s been quite successful. GoGoFantasy currently lays claim to over 700 active users, and its homepage has been seen by over 50,000 people in 118 different countries around the world. Willbacjh reported that 10 new projects are proposed every day, with 24 projects receiving a collective $27,000 in funding since the site’s launch in January.

“It should be easy to fund these fantasy fetish project that scattered communities have an interest in. They all support each other, but they don’t really have a mechanism to do something unique and artistic where the community gets involved and helps fund and participate in it.

“The whole thing about crowdfunding is that it’s democratic. It gives people a voice. You no longer have to wait for supreme people in a company to anoint a project and get it started. If there are capable, willing people who want to start something, they can now make that happen.”

“That’s going to be the key,” Willbacjh said. “Customized and personalized projects that people will be interested in and have a true connection to.”