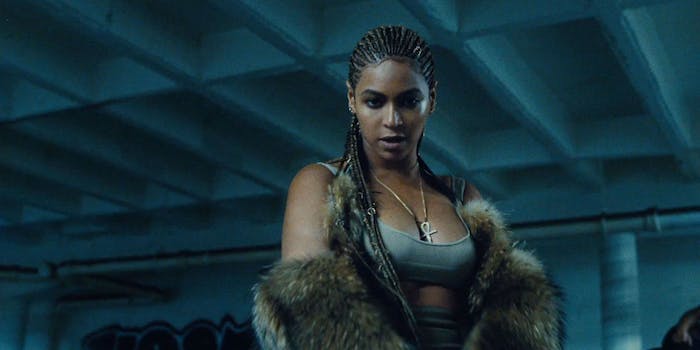 Amid the glut of thinkpieces surrounding Beyoncé‘s massively viral album-event Lemonade—essays that pick apart her imagery and lyrics, primarily “Becky with the good hair,” which may be a cryptic reference to her husband Jay Z‘s paramour—white people are still struggling to understand what’s going on. And talking about it even if they don’t.

Glamour magazine’s U.K. imprint, for example, tried to capitalize on the Becky mystery with this… well, I hesitate to call it an article, really. 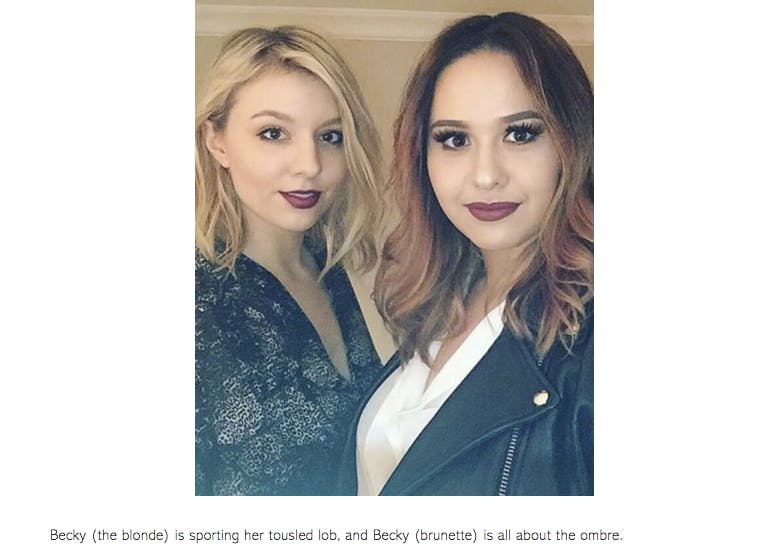 What follows is a fairly random assortment of GIFs somehow related to hair, perhaps the most disastrous of which depicts a young Justin Bieber inappropriately touching jazz artist Esperanza Spalding’s poofy curls.

Perhaps nothing else published in Lemonade‘s wake so hilariously misses the context and deeper meaning of its most personal dig. “Good hair,” as a simple Urban Dictionary search would have revealed, is a loaded term in the African-American community, typically applied to black people whose hair is closer in texture and appearance to white people’s hair. The term has little, if anything, to do with two white British fashion magazine staffers.

"Coincidentally, here at GLAMOUR we have TWO staffers called Becky, and guess what they both have good hair. Great hair, in fact." shoot me

Meanwhile, even USA Today picked up on the fact that “Becky” is more an epithet than a direct call-out, tracing artistic usage of the name back to William Makepeace Thackeray’s 1847 novel Vanity Fair, which charts the social climbing of a Becky Sharp, up through the “white, somewhat basic, and mildly racist” Becky (and friend) of Sir-Mix-a-Lot’s “Baby Got Back.”

Glamour swiftly deleted its tweet promoting the piece—and, eventually, the piece itself. The magazine also half-apologized for being bad and dumb.

We're really sorry for the offence caused – not just for getting shouted at, but because we have missed a big chunk of what Becky meant.

That didn’t exactly help, however.

@MrSeras Yes. Very much so.

.@GlamourMagUK You're sorry you got shouted at?! U didn't understand the meaning of this BS?!? #WorstApologyEver pic.twitter.com/pGmS4WECMx

In fact, I'm almost sure that this was done on purpose. @GlamourMagUK

@Adamant_Yves see this. They're being vindictive, petty and offensive on purpose. They put this up&probably laughed. pic.twitter.com/uKBRpAzGZd

.@GlamourMagUK This is what happens when you have 1-2 women of color in your office, probably ¯_(ツ)_/¯

Doesn’t seem like there’s much hope for the magazine, but we’re guessing the Beckys can go by “Rebecca” until this whole thing blows over.