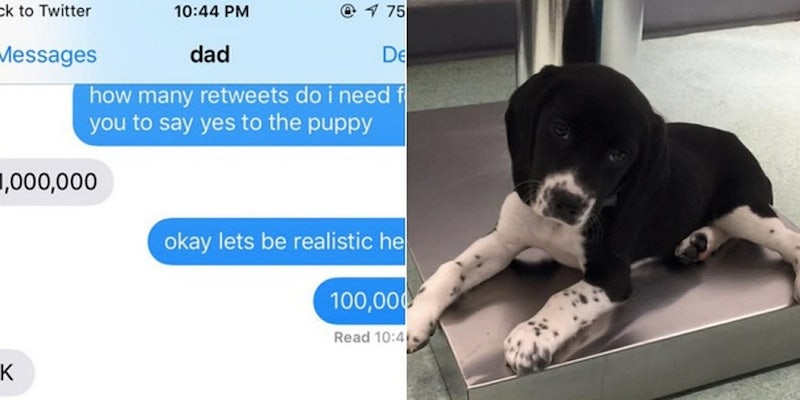 If she gets 70,000 more retweets, this girl can have an adorable puppy

Clara Foster, a high school senior, wants a puppy. Small problem, though: Her dad won’t let her have one until she gets 100,000 retweets.

i would highly appreciate some retweets pic.twitter.com/gRSYqjj1OE

Sure, it’s easier than the million he originally asked for, but it’s still a very high bar to clear for someone who only has 800 Twitter followers. A big enough number that her dad must have thought it would be impossible.

Never underestimate the power of a cute dog photo, though. Clara’s plea for assistance (and a puppy)  has been retweeted 31,000 times as of Monday morning, and she’s only two weeks in. Considering that these things tend to spread exponentially once they reach critical mass, and that her dad apparently didn’t give her a time limit to reach 100k, it looks like she’s got this puppy in the bag.

Don’t literally put the puppy in a bag, though. Terrible idea.

And if you’re going to say no to a teen, just say no—don’t agree to some absurd retweet goal. They’ll find a way to make it happen.

Have we learned nothing from the many teachers who agreed to let their students skip final exams if they could rack up thousands of retweets? Seems like there’s a reason that trend didn’t last very long.

A counterargument, though: Clara writes on her website that she’s planning to head off to college next year, possibly out of state. Will she take the puppy with her? A 100,000 retweets doesn’t prove she can be responsible for a puppy, but it does show she’s pretty good at getting other people to take care of things for her.

Update 8:05am, March 15: In an email, Clara told the Daily Dot the whole story behind her Twitter campaign:

Our family dog of 13 years just passed away a few weeks ago and that is how all of this started. I had talked to my parents about getting another puppy before she passed, but then after she was gone I realized how much I needed a pet in my life. My dad didn’t want me to have the dog because he and my mom didn’t want to be “tied down” when I leave for college.

We had talked about maybe having the dog stay with my cousins in Oklahoma, where I will be attending college, so that was how I got my dad to agree to the whole retweet thing. I don’t think my dad really knew what he was getting himself into when he OKed the 100,000 retweets, but honestly, I never would have expected such a big reaction from the internet either. We didn’t talk about a time limit because he thought I would never get close.

The puppy in the picture is from my cousin’s litter of puppies and no, it isn’t the exact puppy I want because it already has a home. If I can’t get a puppy from that litter, I would most likely adopt from a shelter.