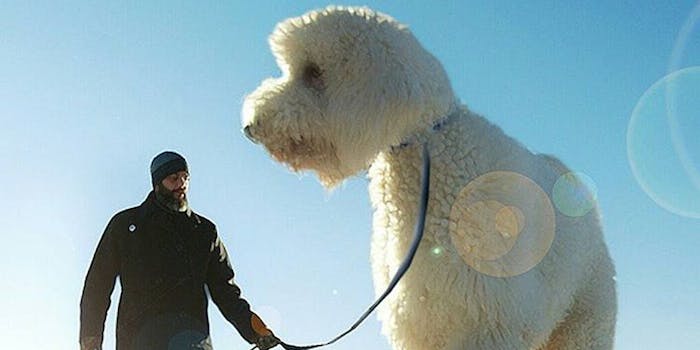 Man Photoshops his goldendoodle into a larger-than-life pooch

The power of Photoshop is incredible. Just ask Christopher Cline, a Photoshop pro who has become known for transforming his goldendoodle Juji into a real-life Clifford the Big Red Dog.

As you’ll see below, Cline redefines “a man and his best friend” pictures by dramatically transforming his companion.

***Flashback***… One year ago I made the decision to make my account totally about my adventures with Juji. I had 1000 followers and struggled daily with editing ideas and editing concepts that were pleasing to your eye as well as my own. Obviously, I do this because it makes me happy, but I also do it because it makes others happy too. I love that this gives me the means to meet so many creative people. I love that I'm able to do this for people all over the world. And I love the fact that working every day with Juji has brought us so close together. So thank you, everyone, for the support and positivity that you give me daily. Juji and I really appreciate it. #barkbox #Bestdog #worldofcutepets #chrisandjuji #goldendoodles #dogsofinstagram #goldendoodlesofinstagram #weeklyfluff #rsa_graphics #two_ru #ig_underground #shotaward #dogsofinstaworld #dogsandpals #dogscorner #igbest_dogs  #excellent_dogs #dog #puppiesofinstagram #bestwoof #dailydoseopuppies #instadog  @dogsandpals #petscorner #animaladdicts #mydogiscutest #petsofinstagram #exklusive_shot #hikingwithdogs #campingwithdogs

“Juji is definitely one of my biggest sources of inspiration,” Cline told the Daily Dot. “He came along at a time in my artistic career when I was feeling low. I keep thinking I’m gonna run out of ideas but with him around they just keep coming. Everyday is a new adventure with him.”

Since Cline started posting these Instagram photos, other dog lovers have reached out to him in the hopes of Photoshopping their own pet pictures.

“I feel so grateful that so many people find happiness in what I’m doing,” Cline said. “I love that I can offer others the gift of making their dog larger than life, because in a dog owner’s eyes that’s exactly how we see them.”

A break in the cold Minnesota weather brought the two of them outside for some adventure. Unfortunately, Chris forgot that during the long winter he had neglected to fix the brakes on the beach cruiser that now barreled down the hill at top speed. Juji on the other hand, had only one thing on his mind….the thrilling thought that his massive weight only pushed them further and faster to an inevitable disaster at the bottom of the hill…with him on top of the pile, giggling at the man who calls himself master. #barkbox #Bestdog #worldofcutepets #chrisandjuji #goldendoodles #dogsofinstagram  #goldendoodlesofinstagram #weeklyfluff #rsa_graphics  #ig_underground #shotaward #dogsofinstaworld #dogsandpals #dogscorner #igbest_dogs  #excellent_dogs #dog #puppiesofinstagram #bestwoof #dailydoseopuppies #instadog  #arts_help #petscorner #animaladdicts #mydogiscutest #petsofinstagram #exklusive_shot #hikingwithdogs #jj_forum_1593

“I’d have to say that one of my favorite images is one I just recently posted, where we’re riding the bike together and he’s on my back,” Cline said. “It was so much fun to create and was one of those pieces that just sort of fell into place very quickly.”

If you find yourself wanting a picture of your own, just shoot Cline an email.