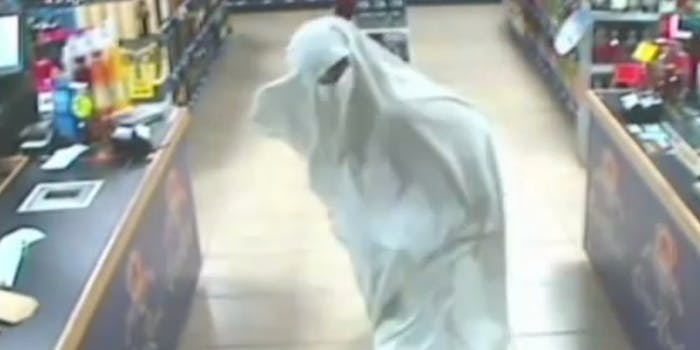 Lift your spirits with this ghostly break-in footage

Perhaps this Alabama poltergeist aspired to up his attire from one bedsheet to three sheets to the wind when he broke into a bar and liquor store.

A spooky situation went down in Alabama Tuesday night as surveillance footage revealed that a liquor store had suffered a rather peculiar break-in.

“We received an alarm call at the ABC store on Highway 431 Wednesday morning,” Anniston, Ala., Police Sgt. Chris Sparks told WMBF News. “That’s when the moment happened; I guess we’ll call it.”

That “moment,” to be exact, is the occurrence of a true blue ghost—more specifically, a man in a white sheet—breaking into the liquor store and running back and forth between the aisles before running out into the cold, dark night.

It was a strange type of break-in, because the ghost didn’t exactly take anything, which actually may be fitting. As Gawker points out, ghosts don’t possess the ability to carry anything, as they’re technically just spirits.

That said, Sgt. Sparks reported that a similar type of break-in occurred at a nearby bar later that night.

“It’s probably the same suspect,” he said. “He was wearing the same attire.”

If caught, the ghost could face third-degree burglary charges and banishment from the ghost community, on account of an inability to properly haunt any type of commercial establishment.