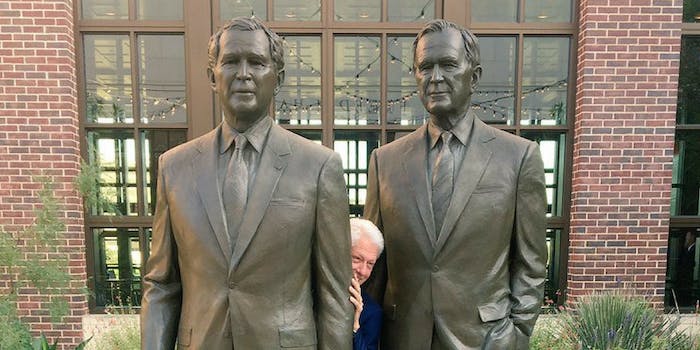 President Bill Clinton beat his father for the presidency in 1992 and he also belongs to a different political party, but to President George W. Bush, he’s still a brother from another mother.

Speaking at the Presidential Leadership Scholars conference in Dallas on Thursday, Bush and Clinton shared the stage and plenty of comedic jabs as they recounted their times while serving as the president of the United States.

“[It] starts with [Clinton] being a person refusing to lord his victory over dad. Dad was willing to rise above the political contest. Both men displayed strong character. Why do I have a friendship with him? Well, he’s called a brother with a different mother. He hangs out in Maine more than I do,” Bush said about their friendship.

Between discussing their time as private citizens and recounting what it was like leaving the Oval Office for the last time, the former presidents spoke about their families—as well as their ongoing bromance.

While Bush’s granddaughter can sing “Happy Birthday” in Mandarin, Clinton’s granddaughter can sing the tune in Spanish. Bush woke up the day after the presidency expecting someone to hand him his coffee, while Clinton realized that no one “plays a song” when he walks into a room anymore. And as it turns out, neither of them are ever jazzed about these kind of speaking events.

“Generally we say [to each other], ‘When’s this program gonna start, and when’s it gonna end?'” Bush said.

“He’ll say to me, ‘Give shorter answers,'” Clinton said of Bush’s impatience.

If their tit-for-tat bro-like nature isn’t too believable, just check out Clinton’s photo with the statues of Bush and his father at the George W. Bush Presidential Center.

Bill Clinton: Just a man who loves standing among the bushes.