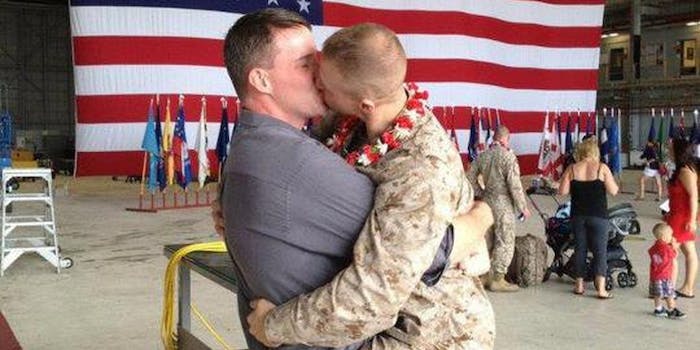 This striking image of Marine Brandon Morgan returning from service has found massive support online, with more than 13,000 likes on Facebook.

Thousands of gay-friendly Facebook users are supporting the troops.

They’re sharing a photo of uniformed Marine Brandon Morgan in a passionate embrace with another man as a giant American flag hangs in the background.

It’ was shared by a Facebook group called Gay Marines, which has 3,606 likes. By contrast, the actual photo has been liked more than 14,000 times. While the striking image has engendered its fair share of criticism, the overwhelming majority of the responses on Facebook have been positive.

“God bless you both and thank you for your service!” wrote Dominique Gerard.

“I wear my Dad’s stripes on my biker vest as an honor to his service,” posted Ken York. “ And this photo makes me more proud to be the son of a Marine than I ever have been!!!! Welcome Home and Thank You!!”

According to his Facebook profile, Morgan is a member of Helicopter Squadron 363, based in Hawaii.

“To everyone who has responded in a positive way. My partner and I want to say thank you. Dalan, the giant in the photo, can’t believe how many shares and likes we have gotten on this. We didn’t do this to get famous,or something like that we did this cause after 3 deployments and four years knowing each other, we finally told each other how we felt. …

We are the happiest we have ever been and as for the whole PDA and kissing slash hugging in uniform…it was a homecoming, if the Sergeants Major, Captains, Majors, and Colonels around us didn’t care…then why do you care what these random people have to say? In summation thank you for your love and support. …

Goodnight all, and Semper Fi.” 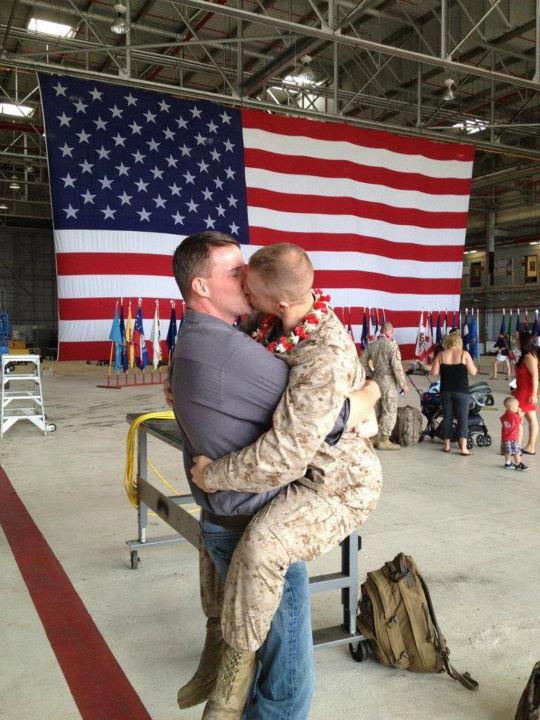